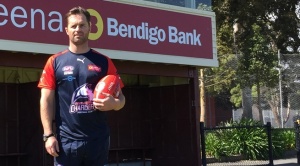 Leigh Clarke’s strong sense of connectedness to the Oakleigh Chargers is something he hopes to instil in his players as the club’s new head coach.

Clarke is the first former player to take the reins at Oakleigh, having been part of the club’s inaugural TAC Cup season in 1995 as a 15-year-old. He replaces Michael Stinear, who will coach Melbourne in the upcoming inaugural AFL Women’s season after guiding the Chargers to TAC Cup premierships in 2014-15 and being named the 2016 TAC Cup Coach of the Year.

Clarke left Oakleigh’s program as a 16-year-old with the onset of serious foot injuries but returned as a strength and conditioning coach in 2010 after a playing career at local level. He progressed to become a line coach at the Chargers and was set to become Stinear’s senior assistant coach for the 2016 season before being appointed as the Richmond VFL team’s forwards coach.

“I can see the charm in being back where I started,” Clarke said of his new role.

“What I love is the connection around here, and that’s what I’m trying to preach to the boys now. It’s not just my connection to the club, but there are team managers, property guys and helpers who were here on my first day and are still here now.

“There’s some pride in saying they’re still involved, I think.”

Clarke said Oakleigh’s issue of having to deal with the football commitments of private-school boys was another constant from the days of the club’s inception, but that sports science and an increasing focus on development had changed the way TAC Cup players were coached.

He said his own coaching style would borrow from the successful approach of Stinear.

“Mick and I were very close,” Clarke said. “I was appointed his senior assistant on a Thursday (before the 2016 season) and on the Monday I got the job at Richmond.

“Mick’s a very mindful coach. He’s got a real kindness and a care in the way he prepares people and treats people on-field and off-field, and that’s what I took away from him.

“My coaching philosophy is built around connecting with the players and engaging them. They’ve been in their own tribe and they’re coming to join our tribe now, and I want them to bring all their skills and characteristics to make our tribe better.”

Clarke said he’d also learned some valuable lessons while at Richmond, from the likes of Tigers VFL coach Craig McRae and the club’s AFL coaches as well as now-retired defender Troy Chaplin – previously a part-time coach at Oakleigh.

“You think AFL football is a really complex game but a lot of what AFL coaches teach is simplifying the game as well,” Clarke said. “So that’s what I’m really conscious of – keeping the game simple for the U18 boys.”

Some of the top-age Chargers set to benefit from Clarke’s tutelage include NAB AFL Academy member Jack Higgins, talented tall forward Toby Wooller and 2016 key defender Riley Jones, who Clarke said was “keen to progress into a midfield role, which would be pretty exciting at his height and shape (190cm and 79kg last year)”.

Clarke also pointed to Louis Cunningham, Ned Reeves and Callum Searle – who will all return as over-age players in 2017 – as others to watch this year.

“They’re the challenge for me – to find out what didn’t work or what stopped them from getting drafted last year and seeing if we can make that happen this year,” Clarke said.

“But something I’m also conscious of is making sure we prepare them so that if they don’t make the AFL, they can feed back into community football and play 250 games for their local club.

“You’d like to see a high percentage of boys continue to grow the game at their local club rather than say: ‘My dream’s over; I’m out’. If the program’s good, the kids will still love the game as much when they leave the program as when they entered it.”