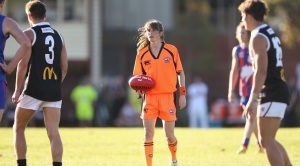 Victorian umpires will play a central role in the inaugural NAB AFL Women’s (AFLW) season, with 21 field, boundary and goal umpires from the AFL Victoria Umpire Development Squad selected to officiate in the competition.

Victoria’s tally is the most of any state – eight more than South Australia and Western Australia with 13 umpires each.

Two of the Victorian AFLW umpires are women, with field umpire Annie Mirabile officiating in Friday night’s opening AFLW match between Carlton and Collingwood at Ikon Park. Mirabile was the emergency field umpire for the 2016 TAC Cup Grand Final.

Fellow AFLW field umpires Nick Jankovskis and Nathan Toner are others to have officiated at a high level in 2016, taking charge in the VFL Women’s Grand Final.

“This is a fantastic opportunity for them to be involved in the inaugural AFLW season,” Nash said.

“With games being televised and a large amount of interest in the competition, it will be a great development experience for them heading into this season as they strive to become VFL senior umpires.”

See the list of Victorian umpires selected to officiate in the 2017 AFL Women’s season below.