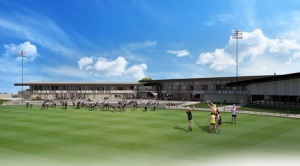 The redevelopment of Moorabbin Reserve – a project set to benefit all levels of the football talent pathway – is a step closer to being realised, with the St Kilda Football Club officially engaging ADCO Constructions Pty Ltd as the project’s builder.

The new Moorabbin Reserve facility will cater for footballers at all levels of the talent and participation pathway, with match, training and administration facilities for Auskick participants, the South Metro Junior Football League, the Southern Football Netball League, the TAC Cup’s Sandringham Dragons, the Peter Jackson VFL and St Kilda.

Demolition works at the current Linton Street site are due to commence in March 2017, with two stages of building to be completed during the 2018 pre-season (north wing) and then in September/October 2018 (south wing).

“It’s important for us to be part of a broader footy community and have a home base, because we’ve been fairly transient since our inception 25 years ago,” O’Connor said.

“I think it gives everyone a good sense of, firstly, what the pathway program is – working very closely with the Saints, the Zebras, the SMJFL and also the SFL in a football hub – but there’s also that connection to the community and sense of place.”

Garry Cranny, project representative for community football, said all parties involved in the redevelopment were looking forward to years of planning coming to fruition.

“It will be rewarding for all involved to finally see a start to construction and our collaborative vision of a modernised and re-activated facility that also provides real enhancements to the local community precinct,” Cranny said.

State Minister for Sport John Eren said the Victorian government was proud to contribute to the redevelopment.

“We’re proud to be delivering $12 million to turn Moorabbin Reserve into a world class venue that will help St Kilda return to finals glory,” Eren said.

State Member for Bentleigh Nick Staikos said the redevelopment would benefit all levels of the area’s football community.

“The upgrade to this iconic ground marks a new era for St Kilda,” Staikos said. “It’s also a big win for local grassroots footy clubs who will finally get the modern facilities they deserve.

“Moorabbin will be a real community hub – home to budding Auskick kids to our elite football champions.”