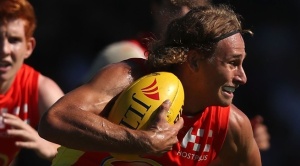 Eight TAC Cup players selected in the 2016 NAB AFL Draft debuted for their new clubs across the second weekend of the JLT Community Series, among 11 total TAC Cup draftees in action.

The eight debutants added to the 14 TAC Cup draftees who stepped out in the previous week of the AFL pre-season competition.

* CLICK HERE to read about the TAC Cup draftees who appeared in week 1 of the JLT Community Series.

Six of last year’s TAC Cup players appeared in Gold Coast’s three-point defeat of Essendon at Harrup Park in Queensland on Sunday, with ex-Murray Bushrangers midfielder Will Brodie (pictured - pick no.9) a key factor in the Suns’ victory. Brodie had 18 disposals, 11 contested possessions, four clearances, four tackles and kicked two first-quarter goals from 75 per cent game time, and is presenting a case to be included in a new-look Gold Coast midfield for Round 1.

Sandringham Dragons 2016 premiership star Andrew McGrath was the other TAC Cup draftee to back up from week 1, compiling 16 disposals for the Bombers in 74 per cent game time after recording nine touches against Collingwood last week. However, the no.1 draft pick was arguably outshone by teammate and former Eastern Ranges mid-forward Josh Begley, who kicked three first-half goals and four for the match from 10 disposals in 64 per cent game time. Begley’s 2016 captain at Eastern, Dylan Clarke (pick no.63), picked up 11 disposals and five marks from 67 per cent game time for Essendon, while ex-Oakleigh Chargers key-position player Jordan Ridley (pick no.22) recorded 10 disposals, three rebound-50s and three inside-50s from 59 per cent game time for the Bombers.

2016 Bendigo Pioneers captain Joe Atley (pick no.32) made his first appearance in Port Adelaide colours in the Power’s one-point loss to St Kilda at Etihad Stadium on Thursday night. The tough midfielder had seven disposals in just 31 per cent game time, while fellow hard-nut Myles Poholke (pick no.44 from the Dandenong Stingrays) had nine disposals and three tackles for Adelaide in 57 per cent game time during the Crows’ 19-point loss to Richmond at the same venue on Friday night.

Dynamic former Oakleigh forward Dion Johnstone (pick no.64) was another to notch up limited minutes on the weekend, picking up three disposals in 44 per cent game time for Melbourne in its 54-point victory over Carlton at Casey Fields on Saturday. Ex-Geelong Falcons ruckman Sean Darcy (pick no.38) played 45 per cent game time in Fremantle’s 55-point loss to West Coast at Wonthella Oval in WA on Saturday for two disposals and four hitouts, while former Murray forward Jy Simpkin (pick no.12) had seven disposals and three clearances for North Melbourne in 45 per cent game time during the Kangaroos’ 21-point win against Hawthorn at Arden Street Oval on Sunday.