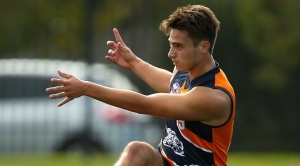 Noah Balta (eight games, 18 goals, ave. 12 disposals and nine hitouts in 2016): “Noah’s a key forward with a strong mark and strong kick. He’s an aggressive player and he plays a lot on instinct. He’s dramatically improved his footy over the last seven or eight months and was elevated into the AFL Academy last year. He can probably play in defence and in the ruck but I think AFL clubs want to see him predominantly as a power forward. At 193/194cm he could nearly play as an on-baller, which we did with him a couple of times last year.”

Brad Bernacki (18 games, ave. 15 disposals and four tackles in 2016): “Brad’s an inside midfielder. His attack on the ball would be one of his main strengths and he’s a good leader and good communicator. He did some good things last year and I think if he displays some of that form then he could push his way into the Vic Metro squad. He’s a baby top-ager – a November birth.”

Ben Caluzzi (pictured - 14 games, ave. 17 disposals in 2016): “Ben is a strong-bodied inside midfielder who’s an elite kick off both sides of his body. He played a bit of half forward, half back and midfield last year. He’s a lot fitter than he was in 2016, so he’s giving himself the best opportunity. Two years ago he was in the Vic Metro squad and didn’t make the team but I think he can really push for that this year.”

Daniel Hanna (four games, ave. six disposals in 2016): “Daniel’s had a lot of injury trouble, so after playing for Vic Metro and coming pretty close to AFL Academy selection in 2015 he missed all bar four games last year. He’s 197cm and quite light at the moment so he needs to work on his strength, but he marks well and I think he’s going to be an interesting prospect. He’s another baby top-ager – he’s not 18 until the end of November.”

Aidan Tilley (11 games, ave. 11 disposals in 2016): “A few AFL clubs looked at Aidan last year as a rookie prospect so they were keen to see him play again. He’s been through all our squads, but as a private-school player last year he was only available at certain times. We’re giving him an opportunity to play more consistently with us this year. He’s predominantly a key defender but can go through the midfield, so we’ll give him an opportunity to play in a few positions and see how he goes.”

Jean-Luc Velissaris (nine games, six goals, ave. 15 disposals in 2016): “Last year was Jean-Luc’s first in any of our programs. He was also a private-school player so we have him in the system full-time this year. He’s a midfielder with really good pace and a really good kick. A couple of times last year he went forward and kicked a few goals. He had two or three very good games and just needs to repeat that consistently.”

Mason Fletcher: Bottom-age son of Dustin (400 AFL games for Essendon from 1993-2015). “Mason plays exactly the same as his dad. He’s a clone of Dustin with the long arms and legs that seem to get in the way, a long kick and a good lever for spoiling.”

Rhylee West: Bottom-age son of Scott (324 AFL games for the Western Bulldogs from 1993-2008). “Rhylee’s a hard inside midfielder who’s in the AFL Academy.”

“We have a pretty similar group to last year’s. I think our bottom-agers are a really good group that could push the top-agers a bit further than last year’s. I think we’ll be in a similar finishing position, around that fourth to sixth mark. Being able to play a final would be a good result for the group – and if they could win a final, that’d be a tremendous result.”

“We’ve added two new coaches. Brett Gourley, who did a bit of work with us last year, is going to be an assistant coach. He’s coached the EDFL U18s for the last five or six years. Also, Russell Humphrey who works with us in administration is going to be an assistant coach. Unfortunately one of our coaches had to pull out due to work commitments in late December, so we were left without an assistant and bringing in somebody from outside in late January/early February would have made things pretty hard. With Russ having previously worked with the U16s and in match-day roles for the U18s, it was the best fit for us.”