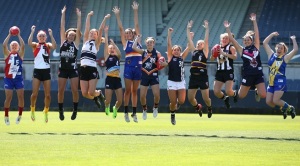 In an exciting partnership with the Transport Accident Commission (TAC), the 12 team league will mirror the TAC Cup for boys, responsible for developing many of the biggest names in the AFL.

AFL Victoria and the TAC have been working over a number of years at establishing girls academies within the TAC Cup boys’ structure, to give young female footballers the same opportunities as their male counterparts via Towards Zero Girls Academies.

The TAC has supported the elite boys’ pathway since its inception in 1992 and will now provide the same leadership and mentoring opportunities to junior female footballers with their sights set on a career in the AFL.

“Within footy circles, the TAC Cup has become synonymous with producing some of the games top talent,” Reaper said. “With the launch of TAC Cup Girls, we’re really excited to see Victoria’s female talent develop and one day play on the main stage in the NAB AFL W or Swisse VFL Women’s competitions.”

“It’s about creating a new generation of leaders and role-models for young Victorian females, and the support of TAC will help us achieve that.

“We can already see the first round of young women to come out of the Towards Zero Girls Academies into the AFLW having a profound effect on our community, and we look forward to seeing that continue to grow with TAC Cup Girls.”

The new under 18 girls competition will replace the academy program, but continue to develop great footballers while empowering players to serve as positive role models, encouraging good driving behaviour among their peers and helping Victoria achieve its Towards Zero vision for a safer future on our roads.

“The TAC’s partnership with AFL Victoria and junior football pathways is about creating champions on the field and safe drivers on the roads.”

The competition starts on March 4 with Murray Bushrangers versus Bendigo Pioneers at Punt Road Oval, and will feature five rounds in the inaugural season, which will be expanded in future years.

In a similar move to the AFL Victoria’s VFL competitions (Peter Jackson VFL and Swisse VFL Women’s), the TAC Cup social media and online accounts will operate through the one channel at taccup.com.au, @TACCup #TACCupGirls (twitter) and TACCupfooty (Facebook).