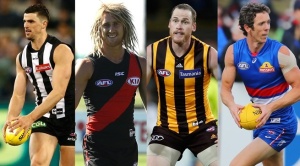 The new breed of ex-TAC Cup AFL skippers include:

Brisbane’s Tom Rockliff and Fremantle’s David Mundy (both ex-Bushrangers) were those to be replaced as club captains by non-TAC Cup players over the off-season. Taylor Walker (Adelaide), Steven May (Gold Coast) and Shannon Hurn (West Coast) are the other AFL skippers not to have come through the TAC Cup system.