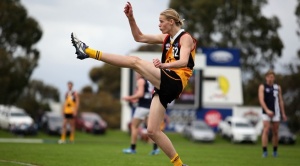 “You can’t really go past the five players we’ve got in the AFL Academy:

Hunter Clark (12 games, ave. 16 disposals in 2016): “Hunter’s a medium-sized defender but he’s also shown he can play as an inside midfielder and he’s doing that really well at the moment in practice games. His strength as a back-line player is that he reads the ball so well and creates time and space, so he’s got plenty of time to make decisions. He’s very proficient on both sides of his body by foot and as brave as they come.”

Oscar Clavarino (seven games, ave. 10 disposals and three marks in 2016): “Oscar’s probably the no.1 key defender in the TAC Cup. He’s got some running ability and really good closing speed and he’s got the go-go-gadget arms so he can close down space in the air pretty quickly. His strength is that he’s probably actually better as a forward than as a defender – he played forward through our junior programs and for the Vic Country U16s. We’ve also played him on the wing as a bottom-ager for his learning, so I think he’s multi-purpose player and that’s why we rate him so highly.”

Luke Davies-Uniacke (two games in 2016): “Luke’s a beast of an inside midfielder. He’s probably similar to a (Richmond midfielder) Dustin Martin-style player and not far from a (Sydney on-baller) Luke Parker style. His clean hands are unique, his ability above his head and his body strength are his strengths. At the moment he’s a bit inhibited because of a shoulder reconstruction he had in November and he only recently started his program for the year. He’ll be fully ready to go by Round 1 though.”

Aaron Darling (16 games, six goals, ave. 11 disposals in 2016): “Aaron’s done an ACL, so we probably won’t get to see him play this year. He had the surgery done in December and they’re saying he’s ahead of schedule. I think he was the best kick in the draft and he’s a beast of a small inside midfielder. For a 179cm player, he hit the ball with power and he kicked it with power – similar to a (GWS midfielder) Dylan Shiel-type. The knock on his game was always going to be his fitness and his tank, but he’s going to get eight months to work on that now. His body should be ready to go by the Draft Combine when he’ll be able to show everyone his running capabilities, and I think he’s still in draft contention. He takes a new role now as an assistant midfield coach where he’ll sit with the players and go through vision.”

Tom De Koning (pictured - 11 games, 17 goals, ave. five disposals and 10 hitouts in 2016): “Tom’s now basically sitting on 200cm and is a genuine forward with really good hands and a really sweet kicking style. He also has the ability to go into the ruck but we’ll play him mostly as a key forward. He’s maybe a little bit behind in his development because he’s a tall skinny type, but he’s building his frame – he’s put on six to seven kilos since we’ve come back for the 2017 pre-season.”

Aiden Bonar (two games in 2016): “Aiden’s coming back from a second ACL operation. He returned after his first one last year but it didn’t hold so they had to re-do it. He’ll be ready to go around May/June. I rate him as high as our players who are already in the AFL Academy program. He’s 190cm and nearly 90kg and he’s just a beast – there’s not an ounce of fat on him. He can play as an inside midfielder, he can play forward and he can play back. If he gets his opportunity, I think he’ll emerge late like (Dandenong’s Melbourne draftee) Liam Hulett did in 2015.”

Reece Piper (12 games, ave. 12 disposals in 2016): “As a bottom-ager, Reece nearly broke his back by hitting a fence and only played about two minutes of TAC Cup football. He came on as a top-ager but he’s actually born on the 30th of December, so even though we’ve listed him as a 19-year-old, two days later he’d be an 18-year-old. He’s just a late developer. He’s by far our best kick – a 60-metre kick. He played as a small defender at Vic Country last year but he’s going to play as an inside midfielder in 2017 because we think that’s the style of position he needs to play.”

Bailey Morrish (18 games, ave. 13 disposals in 2016): “I’m not sure why Bailey didn’t get taken in the drafts last year. Every AFL club we’re talking to at the moment is saying they were surprised but they just didn’t have enough picks. He’s a genuine half back flanker, but we’re going to play him up around the ball a bit more and throw him forward this year. He’s matured off the field and is training the house down at the moment.”

Tom Murphy (10 games, 12 goals, ave. 10 disposals in 2016): “Tom had interrupted pre-seasons at 17 and 18, and had glandular fever last year but came back and still did enough to get an invitation to the State Combine. He’s a genuine third forward but we’ve actually played him as an inside midfielder in practice games and he doesn’t look out of place. He’s got AFL attributes in every area, it’s just about getting his body right.”

Tom Roberts (four games, ave. six disposals and 11 hitouts in 2016): “Tom’s a 204cm ruckman. As a 16-year-old he was hovering around the 125kg mark but he’s just clicked under the 110kg mark. He’s a work in progress. He’s a really good tap ruckman but we believe he’s a forward and he understands playing in the forward line better. He’ll get first hands to the ball and he jumps at the ball now because he’s lost that weight he had.”

Mason De Wit (14 games, ave. 13 disposals and three marks in 2016): “Mason was really close at the drafts last year. Early in the season he suffered a meniscus tear but didn’t have an operation, came back and just played with it and still had the ability to make the Young Guns Game. The knee operation may have put AFL clubs off. He’s a defender/wingman who can even play ruck at 193cm. He’s also played in two U19 grand finals as a key forward, kicking multiple goals in both games.”

“I reckon this year’s group is pretty similar to last year’s because we’ve got a mixture of top-age and bottom-age talent. Our biggest issue will be having five AFL Academy players and rotating them in and out when they’ve got their school football commitments. When we’re able to put our best team on the park, I think we’re going to be a very challenging proposition, but then the other thing is that a lot of our bottom-agers are key-position players and as part of our program we’ll look to develop a couple. We’ve also probably added a little bit more speed, and I think last year we might have been a bit stronger defensively but I reckon we have a better forward structure and midfield structure this year.”

“With Wayne Siekman being appointed Collingwood’s AFL Women’s coach, we lost our senior assistant, so we elevated Nick Cox to become senior assistant coach and brought in three other new coaches to the program. Rob Railton was a pretty successful player for Gippsland Power and coached in his own right locally as well. He’s doing all the player development programs and he’ll end up really being a mentor for (head coach) Craig Black. We’ve elevated Josh Bourke, who was our U16 coach and a Vic Country U16 assistant coach last year. Peter Freeman has come into the program a bit more too. He’s doing the U16s but also a bit more with our U18s. Peter played five games at St Kilda, his son James came through the program, and now Tom Freeman is in his top-age year in 2017.”