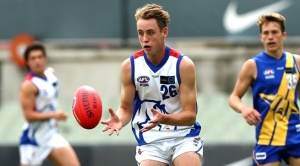 Jack Higgins (nine games, 20 goals, ave. 29 disposals and seven marks in 2016): “Jack’s a member of the AFL Academy program. I think his record speaks for itself and we’re really excited to see where he can get to this year. He played through the midfield and forward line last year and he’ll probably play similar roles for us this year. The big thing for us is to see him step up his leadership. He certainly leads in terms of the way he goes about his training – he’s as good as we’ve got here – but what I’m looking for is for him to drag some of the other boys up to a similar standard. He’s a pretty special little player but he works hard and gets results from the hard work he puts in.”

Toby Wooller (11 games, 12 goals, ave. 15 disposals and eight marks in 2016): “Toby played as a key forward last season and acquitted himself really well. This year he’s actually finished Year 12 so he becomes a full-time player at the Chargers and he’s one I see as a definite leader amongst our group. I think we’ll play him as a forward but we might throw him back for a period of time to show his versatility. I actually wouldn’t mind seeing him go through the midfield at some point too – I think he’s got it in him.”

Riley Jones (pictured - 15 games, ave. 10 disposals and three marks in 2016): “Riley was a tall defender for us last year and played on some pretty handy types and was able to do some really good jobs. He’d pretty much never played down back before so I think he learned a lot about the game. This year we’ll look to give him opportunities up forward and I’m also thinking we can give him opportunities through the midfield. He’s a really smooth mover, a good user of the ball and has a good set of hands as well.”

Noah Answerth (seven games, ave. 13 disposals and four tackles in 2016): “Noah’s a defender who’s very hard at the ball, kicks the ball really well, has some terrific speed and is a real competitor. I really enjoy seeing the way he goes about things. He was one I thought we really missed in the preliminary final loss to the Bushrangers – when (subsequent GWS draftee) Lachlan Tiziani got hold of us (kicking six goals) I thought Noah would have been a good match-up for him in the air and on the ground. He’s the brother of (2015 TAC Cup Grand Final best-on-ground medallist) Kade Answerth.”

Matthew Day (not on list in 2016): “Matthew was involved in some of our development programs going back a couple of years but has been a really keen basketballer and played some high-level basketball. He played some school footy at Marcellin last year that we were really impressed by and his work in our pre-season so far has been really pleasing. He’s very good in traffic, has silky skills, covers the ground well and is just a really smooth mover. He’s a top-ager and I’m really excited to see where he can get to.”

Louis Cunningham (14 games, ave. 22 disposals and six marks in 2016): “From all reports Louis was close to being rookie-listed last year. He played predominantly down back for us last year but we’re keen to give him exposure in all parts of the ground this year, so we’re looking for him to play more of a midfield role. We’re keen for him to get some exposure at VFL level in the early part of the year as well.”

Ned Reeves (10 games, ave. 10 disposals and 23 hitouts in 2016): “Ned’s a developing ruckman who measures in at about 208cm at the moment and he’s starting to fill out. We were really pleased with the progress he showed last year. He’s shown an ability to go forward, take some marks and kick some goals, and his ruck work was terrific. He’s recently had a hip clean-out so he’s a little bit away from playing.”

Callum Searle (10 games, ave. 18 disposals in 2016): “A bit like Louis Cunningham, Callum played a lot across half back last year. We’re really keen to see him go through the midfield too and I think he’ll be one that really benefits from being in the one place for the whole season – last year he had school footy, club footy and some Vic Metro commitments as well.”

Daniel Stanford (seven games, 10 goals, ave. 11 disposals and five marks in 2016): “Daniel’s a taller defender who’s had limited opportunities with us, effectively due to injury and school commitments. He played a couple of finals with us late last year and was a really good performer. In terms of body size he’s probably not too dissimilar to a top-age player, but he’s developing nicely and putting in a lot of hard work.”

Tom O’Sullivan (one game in 2016): “Tom’s battled a lot of injuries over pretty much the last couple of years. He had some real issues with stress fractures in his back last year and in my opinion he would have played in our finals series if he had have been fit. Hopefully he can get a good crack at it this year. He’s a midfielder but I think he can also play forward and kick some goals for us.”

“I’m quite pleased with the group when we look at what the side could potentially be in Round 1. I’m pretty confident we’ve got some draft-able quality amongst that group. I think we’ve probably got a bit more leg speed than we’ve had over the previous couple of years, so that’s exciting and might give us a bit of a different look. One of the bonuses we’ve got this year – and this all goes in cycles – is that we have a number of private school boys who finished Year 12 as bottom-agers, so that makes them available week in week out. That certainly helps our coaching staff have more of a stable group to work with – I think we rolled through 75 players last year, so we may not have to go that deep this year. I think we’ve got some good depth in the bottom-age group too, so they’ll get plenty of looks over the course of the year. Forecasting forward, I think the future looks quite bright.”

“I’m really pleased with how our new head coach Leigh Clarke’s fitted in. He’s been involved in the program before and certainly knows the way we go about things in terms of the practices and the culture we want to continue to grow. Having a new coach come in with some new ideas and a new voice has been really good to piggy-back on the great work that (two-time Chargers premiership coach and now Melbourne AFL Women’s coach) Mick Stinear did previously. Outside of Leigh, we’ve been able to keep the same coaching group together.”