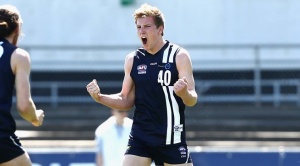 James Worpel (15 games, 11 goals, ave. 20 disposals and six tackles in 2016): “James is a very strong midfielder in the mould of (Collingwood’s) Taylor Adams or (North Melbourne’s) Ben Cunnington, who both came through our system. He’s a very similar player to them but he’s a lot quicker – he’s more explosive and he’s a much better runner. Nothing fazes him. He’s in the AFL Academy.”

Cassidy Parish (19 games, ave. 19 disposals in 2016): “Cassidy’s a lot different to his brother Darcy (currently at Essendon) – he’s not as polished but he’s a really big midfielder. We could probably play him at centre half forward if we really needed to. He’s a great stoppage player and he exits the packs really well and racks up lots of possessions. He’s a bit ungamely but he’s a very effective player. A lot of AFL recruiters would be interested in him to replace those big midfielders like (Sydney’s) Josh Kennedy or (Essendon’s) Jobe Watson – he sort of fits that mould.”

Adam Garner (three games in 2016): “Adam’s a cousin of (St Kilda’s) Paddy McCartin and he plays a similar position – he’ll play as a full forward/centre half forward this year. I think Paddy’s more mobile but Adam’s got himself really fit after having a few injuries in the past. He played for Vic Country U16s two years ago and just needs to have an injury-free season and put it together.”

Matthew Ling (five games, ave. nine disposals in 2016): “Matthew’s another winger who played with us in the finals last year. He looks a likely type as well.”

Cooper Stephens (11 games, ave. 14 disposals in 2016): “Cooper plays on a half back flank and will probably go into the midfield this year.”

Gryan Miers (five games, three goals, ave. 13 disposals and four tackles in 2016): “Gryan played some games towards the end of last year and surprised us as an on-baller. He’s a bit like (the Western Bulldogs’) Luke Dahlhaus. He went back to his local senior club Grovedale and dominated in their finals campaign until they got knocked out. He ran under six minutes in a 2km time trial over the pre-season, so you’ve got to take notice of the kid because he’s a running machine.”

Hayden Elliot (pictured - 19 games, ave. nine disposals and 16 hitouts in 2016): “Hayden probably should have been playing in a key position last year but we don’t usually have many talls and he had to play in the ruck. We’ll give him another run this year as a centre half forward/centre half back because that’s where AFL recruiters want to see him play.”

Charlie Francis (12 games, ave. nine disposals and four tackles in 2016): “Charlie had fairly significant heart problems as a 17-year-old which he’s gotten over, so we want to give him another year. If his heart over-worked too much he could have suffered a heart attack – it was that serious. With medication and management and the fact he’s prepared to take the risk, we’re playing him. He had a really good season last year.”

Peterson Kol (no games in 2016): “Peterson’s been injured for two years so we want to give him a bit of a crack. It’s been nothing major – just hamstrings and ankles and all sorts of things. His brother Harry won our best-and-fairest a couple of years ago. He’s a really tall athletic kid and we just want to get him on the track and give him a chance.”

Jack Walters (six games, ave. 14 disposals in 2016): “Jack’s a cousin of (Geelong Brownlow Medallist) Paddy Dangerfield and he was showing really good form at the start of last year but unfortunately hurt his knee and missed the majority of the season. He didn’t require an operation but it was pretty significant – he was very close to doing his ACL. We want to give him another crack as well.”

“I thought we’d struggle to make the top eight last year and the boys did really well to get to a preliminary final and spend most of the season on top or in second on the ladder. They were a really even group. They played really well as a team and got 100 per cent out of themselves. I’m not 100 per cent sure about this year’s group, but I know they can run so that’s going to help. We never have many massive key-position players or ruckmen, but I think we’ve got a really good running group.”

“Our new head coach Daniel O’Keefe is just what I’m after. He came from Warrnambool, played with the Falcons and got drafted at pick no.15 in 2006 by Sydney. He unfortunately had a lot of injuries and that curtailed his career (no AFL games in three seasons with the Swans). He was also very close to being a professional golfer, so he understands sport and the disappointment that can come with it. He played for Geelong in the VFL, was an assistant coach at Geelong West St Peters and also Newtown with (former Geelong AFL player) David Wojcinski. He fits all the criteria that I look for in a coach. All our line coaches around Daniel are basically new too.”