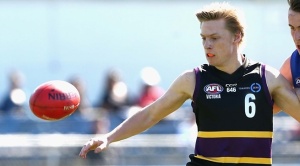 Charlie Spargo (pictured - eight games, eight goals, ave. 18 disposals in 2016): “Charlie’s a small forward/on-baller. He’s from Albury in NSW. He’ll play in the Division 2 U18 Championships in their squad and I imagine he’ll play for the Allies in Division 1 as well. He played some very good footy for us last year and he was very good for NSW/ACT as well. We’re really hopeful for Charlie’s draft chances this year. He’s an AFL Academy player.”

Doulton Langlands (16 games, ave. 14 disposals in 2016): “Doulton was one of our best bottom-age players last year. He’s a very quick player and he’s really built his strength up this year. He’s a really good size – 188cm and 80kg now – and he’s a terrific athlete with power and speed. We think he’ll attract the attention of AFL clubs. He’ll be an academy player for the Giants as well.”

Daniel Johnston (seven games, four goals, ave. eight disposals in 2016): “Daniel’s another boy from NSW. He’ll be a key forward and he’ll play a little bit in the ruck for us as well. We think he’s got the size and the power to attract a lot of attention.”

Jordon Butts (11 games, ave. 13 disposals and three marks in 2016): “Jordon’s a 197cm key defender and he can also go forward. He played some good footy for us last year as a bottom-age player. He’s actually born on the 31st of December so he’ll play all his TAC Cup football as a 16-year-old and 17-year-old. We think he’s a good prospect.”

David Smith (not on list in 2016): “We’ve just uncovered David this year – he was doing a bit of work with the Laguntas program at Richmond. He’s a top-age indigenous boy who has phenomenal speed – he consistently runs 2.7 seconds in the 20m sprint which is elite. He hasn’t played a lot of footy and this is the first year we’ve seen him. We’re hoping to use his explosive speed and power and improve his footy this year.”

Nick Richards (18 games, 15 goals, ave. 17 disposals in 2016): “Nick was a bit of a bolter at the end of last year and attracted a bit of attention from AFL clubs. He was named our best player in the finals so we’ll be looking for some more improvement from him. He’ll play more of a role around the ball this year – he played a bit as an outside midfielder and small forward last year, so we’re hoping to see him win some more contested footy.”

Ben Paton (20 games, 12 goals, ave. 16 disposals and five tackles in 2016): “Ben showed a lot of improvement last year. His top-age year was his first in the program, so we’re keen to have another look at him.”

Isaac Wallace (12 games, ave. 18 disposals and five tackles in 2016): “Isaac played some terrific footy for us last year but suffered a broken leg during the season as well. On the back of also having a broken leg as a 16-year-old, we want to expose him to another year of TAC Cup football.”

“We probably met expectations last year. I think we had a team – and I communicated this clearly to the players throughout the year – that could and should have won finals, which is something the Bushrangers hadn’t done for a little while. To be perfectly honest, I don’t think we’ll have the depth we had last year but we’ll be more than competitive. I’ve just got that knowledge now from a year with our top-age players so I’m feeling a bit better informed about those guys and really looking forward to seeing our bottom-age players as well – we think we’ve got some good depth in that age group.”

“We’ve lost a couple of coaches from last year but we’ve promoted a couple of guys from our U16 program. Daniel Preston is coming from our 16s to coach our back line. Ben Davey makes a return to coach our midfield after a bit of an interrupted year – he also worked with the Vic Country U18s last year. Mark Brown remains as the forward line coach and we have Dale Carmody – who was involved at the club in 2007-08 – coming back to coach our tall forwards and rucks after working overseas for a number of years.”