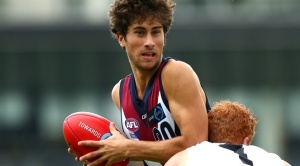 Hayden McLean (19 games, 27 goals, ave. 11 disposals, five marks and seven hitouts in 2016): “Hayden had a big bottom-age year and played in our grand final side. He’s a key forward/ruckman and can probably play a bit of centre half back too, so he’s quite flexible and has a really good impact on the game. He’s 196/197cm so he’s a decent lump of a lad and he looks like he’s getting fitter and stronger. He’s mobile enough to get on-ball and almost be another midfielder as well as doing really well in the ruck. He’s in the AFL Academy.”

Andrew Brayshaw (seven games, ave. 11 disposals in 2016): “Andy was part of our grand final side last year. He played small forward/small back utility-type roles in his bottom-age year as he’s nice and tough and he can really focus and do a job. It’s going to be interesting to see how he translates that into the midfield this year and whether he can take it up a notch.”

Isaac Morrisby (14 games, 20 goals, ave. 10 disposals and four marks in 2016): “Isaac was also part of our grand final side last year. We’re hoping he can dominate as a key forward this year. He’s got a fantastic set of hands and kicked five goals in a half in the U17 All Stars game last year. He’s a good size at TAC Cup level (191cm) but he’s not going to be a massive bloke. We’re hoping he can show his ability to get around the ground a bit more this year.”

Will Walker (11 games, 15 goals, ave. nine disposals in 2016): “Will’s come from a soccer background. He was a little bit unlucky not to play in the U17 All Stars game last year – he was included in the squad but broke his finger. He’s fairly raw to footy but he’s a great little athlete and I think he’s going to be an excitement package this year.”

Kai Owens and Joel Amartey (both not on list in 2016): “Up until the last year or so they’ve been concentrating on basketball. Kai’s mum is from Japan and Joel’s dad is from Ghana. We hope they’re going to be surprise packets and jump out of nowhere. Both are tall and very athletic. Kai’s had a few little setbacks with knee tendinitis, but Joel’s probably exceeded our expectations to this stage in the impact he’s been having playing in the ruck and also forward in practice matches.”

Hamish Brayshaw (12 games, 18 goals, ave. 18 disposals, six marks and four tackles in 2016): “Hamish is still getting over foot surgery and we’re hoping that without a hiccup he can be ready for Round 1. He ended up playing the last month of last season with a broken foot – he was unaware of it and we were unaware, and we found that out post-grand-final. He’s a pretty tough kid. We think his leadership’s fantastic, being our captain last year in a premiership season.”

Ari Sakeson (pictured - 14 games, ave. 16 disposals and five marks in 2016): “I think Ari was a little bit stiff at the drafts because he finished the season very well. He has to keep improving on his game sense and his execution but he’s a hell of a competitor and a really nice athlete. We’ll probably look to play him in a few roles a bit further up the ground than his key defensive post to expand his horizons a bit. He’s come back as fit as a fiddle this year and he’s looking quite exciting.”

Barclay Miller (no games in 2016): “Barclay’s a St Kilda international rookie prospect. He was a national-level basketballer in New Zealand. He’s coming along quite nicely but in essence he’s already on an AFL list, similar to (Hawthorn’s) Kurt Heatherley here in 2013.”

Hamish and Andrew Brayshaw: over-age and top-age (respectively) brothers of Angus (31 AFL games for Melbourne) and sons of Mark (32 AFL games for North Melbourne from 1990-92). See above for more.

Sebastian Williams: top-age grandson of Don Williams (205 AFL games for Melbourne from 1953-59 and 1964-68 and member of Melbourne’s Team of the Century). “Seb’s an on-baller who can play half back/half forward and is a very dynamic athlete. He’s a nice little player.”

Lachlan Harris: top-age son of Leon (186 AFL games for Fitzroy from 1979-89). “Lachie’s got a little bit of X-factor and a real feel for footy. He’s got a great turn of speed and evasiveness and he needs it because he’s a smaller player, but I think he also has a great ability to have a say on the outcome of a game.”

James Rendell: bottom-age son of Matt (164 AFL games for Fitzroy from 1981-91, 13 AFL games for Brisbane in 1992). “James is a key-position player or smaller jumping ruckman who’s quite physical and has a red-hot crack at his footy. Hopefully he ends up growing as big as his old man.”

“We’d like to think this year’s group can reach the heights of last year’s. It’ll be exciting to see whether they’re going to be as resilient and capable of stepping up to challenges as the boys were last year. The boys were very talented last year but I think their best attribute was their overall work rate, and when they were challenged and you thought they were out of it, they found something else. We’re talking to the boys a lot about that this year – it doesn’t matter where you find yourself, you’ve just got to pick yourself up and get right back into it.”

“There’s been one minor change – Danny Ryan’s moved out to the Casey Demons in the VFL with (former Dragons head coach) Justin Plapp so Brad Berry’s stepped up into a role as an assistant coach. We maintain our other assistants in Jackson Kornberg, Mick Lovejoy and Fraser Cameron, so it’s a pretty settled group under Jeremy Barnard. The work of Jeremy and the coaching staff, volunteers and other people around the club is a massive reason for why we did well on the field last year. Some examples are Pete Thomas – our long-term physio – who we inducted as a life member last year and Ian Penn – our game-day footy manager who’s been here for 25 years – who was named our TAC Local Legend.”