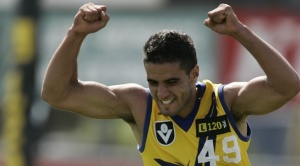 Seven of the 19 Australia Post AFL Multicultural Player Ambassadors for 2017 announced on Wednesday made their starts in the TAC Cup.

Heppell is Australian, Zaharakis has Greek heritage, Nicholls is of Fijian descent, Salem and Houli have Lebanese heritage, Daw has Sudanese heritage and Jong is of Taiwanese and East Timorese descent.

Players of multicultural heritage this year comprise 15 per cent of player lists across the 18 AFL clubs and 7.8 per cent across the eight AFL Women’s clubs.

The AFL Multicultural Player Ambassadors will be at the forefront of the AFL’s Multicultural Round, which will be held in Round 19 of the upcoming AFL Premiership Season (July 28-30) and will continue to celebrate the many cultures present in the Australian Football community.

“They will play a crucial role in increasing cultural awareness, promoting inclusion and encouraging participation at all levels of Australian Football,” McLachlan said.

“We have increased the number of female ambassadors from two to four in 2017, which reflects the growing prominence of NAB AFL Women’s and the commitment we have made to build the foundations of women’s football.

“It’s a historic year in our game. In addition to the launch of AFLW, we are also taking a Toyota AFL Premiership Season match to China in Round 8. The landscape of football is changing and the ambassadors reflect that.”

There are also three ambassadors who are or have been part of other AFL Victoria talent competitions: Former Coburg defender Adam Saad (now at Gold Coast) was drafted from the Peter Jackson VFL, while Darebin’s Darcy Vescio and VU Western Spurs’ Helen Roden are Swisse VFL Women’s players currently also on AFL Women’s lists at Carlton and Collingwood respectively.