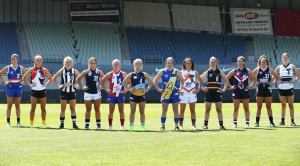 The full 2017 TAC Cup Girls squads have been release ahead of Round 1 this weekend.

While Murray Bushrangers kicked off the season with a win over Bendigo Pioneers on March 4, 10 teams will make their TAC Cup Girls debut across three venues this weekend - Frankston Oval, Learmonth Oval and RAMS Arena.

WHAT YOU NEED TO KNOW ABOUT TAC CUP GIRLS

- Teams will play a five round season,which will be expanded in future years.

- The premiers will be the team on top of the ladder at the end of five rounds, with a best and fairest and leading goal kicker to also be announced at the end of the season.

- The  final round to be on Good Friday (April 14), at RAMS Arena (Highgate Recreation Reserve) in Craigieburn.