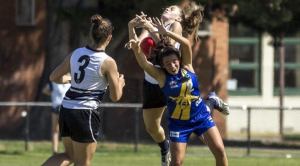 Four teams remain undefeated after Round 2 of TAC Cup Girls.

Murray Bushrangers, Dandenong Stingrays, Calder Cannons and Geelong Falcons are only separated by percentage at the top of the ladder, with all four teams having won both games to open the season.

Calder Cannons inflicted Eastern Ranges’ first defeat, with an 11-point win on Friday night at RAMS Arena. After Calder led in the first two terms, Eastern hit the front right on the half-time siren. The home regained the lead midway through the third as Felicity Theodore kicked her third to help Calder on the way to a win. Chloe Molloy also finished with three, seeing her join Murray Bushranger Sophie Damon at the top of the goalkicking ladder with nine goals for the season.

Northern Knights recorded win number one for the season with a 36-point win over Western Jets. After an even first term, the Knights opened up the game in the second term kicking three goals to one. The Knights kept the Jets goalless in the second half, extending the margin to a five goal win – Ciara Fitzgerald kicking two.

A goalless first half between Sandringham Dragons and Oakleigh Chargers saw just three points separate the two teams at half-time. Sophia Rothfield kicked the first of the game for the Dragons, which was quickly followed up by Olivia Vesely to give Sandringham a 13-point three-quarter-time lead. While Melanie Bertuna cut the deficit to seven points early in the final term with the Chargers’ first goal of the game, Charis Ulu Peniata kicked the sealer for the Dragons for a 16-point win.

Greater Western Victoria Rebels jumped Geelong Falcons in the first term, and held the lead for three quarters before the home side flew home with a five-goal final term to record a 29-point win. Paige Sheppard led the way with two goals for the Falcons, with Olivia Purcell, Lucy McEvoy and Sophie Dinneen in the best.

Charlotte Seedsman and Samantha Ryan led the way for Dandenong Stingray with three goals each in a 72-point win over Gippsland Power. A five-goal third term confirmed the win, as the Stingrays moved to second spot on the TAC Cup Girls ladder.

Murray Bushrangers defeated Bendigo Pioneers in the opening game of the season by 70 points, in a rescheduled Round 2 match on March 4 – Damon kicked six goals for the Bushrangers.

Match of the round in Round 3 is the undefeated clash between Geelong Falcons and Dandenong Stingrays.