Bolting from the footy blues 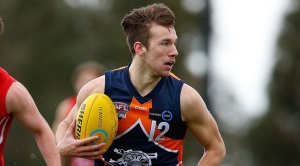 An under-16 grand final set Calder Cannons key forward Noah Balta on the path towards joining the NAB AFL Academy and becoming one of the TAC Cup’s top 2017 AFL Draft prospects.

Balta’s 2015 season with Essendon Doutta Stars in the Essendon District FL broke him out of a football funk that could have seen the 194cm 17-year-old lost to the game.

His performance in the Stars’ under-16 premiership triumph provided the foundation for an impressive 2016 campaign at Calder in which he booted 18 goals in eight games.

Balta’s form was recognised late last year with elevation to the AFL Academy alongside junior teammate and good friend Cameron Rayner of the Western Jets.

“It was that game (that changed things) – when something’s on the line, I realise how well I can play,” Balta said of the under-16 grand final. “Cam got named best-on-ground but all the other boys were saying I should have got it!

“I thought: ‘Why can’t I play like that all the time?’ and then I just started going for it.

“In under-12 football I was a good player, but everyone started to catch up to me and I think it kind of got my head down. I started to become an average player and talked myself down, but I started lifting again and realised what I could do.

“It was that whole under-16 season. I worked with (former Essendon and Geelong ruckman) John Barnes that pre-season – he helped me with my skills and he’s very honest with me.”

Balta named Barnes as one of the most significant influences on his football career to date, but his addition to an AFL Academy Level Two squad including 22 other TAC Cup players should see a few more influential names added to that list.

Balta attended the Academy’s annual high-performance training camp in the United States in January, spending a week training at the IMG Academy in Florida before a further week in Los Angeles under the eyes of former AFL champions such as head coach Luke Power and assistants Brad Johnson, Peter Sumich and Nick Dal Santo.

“They’ve had the AFL experience and I want to be like them and do what they’ve done,” Balta said of his Academy coaches. “To do that, I’ve got to listen to what they say and really take it in.

“I learnt I could push harder than I thought I could (on the US camp). You think you’ve got a certain level of potential but then once you think you’ve reached it, you just blast right past it with an experience like that.

“On one of the big days we had a 3km time trial and then sprints, and a couple of boys –myself included – were really fatigued and we kind of slowed down before the line and had to re-do it.

“Everyone got behind you. From a group that was nothing together (before the camp) to how we’ve bonded now, it’s really something special.”

Cannons Talent Manager Ian Kyte has seen Balta fully invest himself in his football during his time at the club, with the resolution of eyesight problems also a key factor in his rise to prominence.

“That’s been helped by getting contact lenses, so he actually sees the game and what’s going on down the other end a lot better than he used to. We’ve found that’s really helped his marking and his depth perception of where the ball is.”

Balta only wears the contact lenses while playing football but has noticed he’s running under the ball less often and that marks had “started clunking a bit more”.

Kyte said Balta would likely be used mostly as a power forward in 2017, but would also pinch-hit in the ruck and “could nearly play as an on-baller, which we did with him a couple of times last year”.

No matter where he plays on the field this season, Balta wants to throw everything into making it work. His main goal for 2017 is to be selected by an AFL club come November, but he won’t let his head drop if that dream doesn’t come to fruition.

“I just want to know I’ve done the best I could and that I couldn’t push any harder,” Balta said.

It’s a mindset far from the one he was in just a couple of years ago.