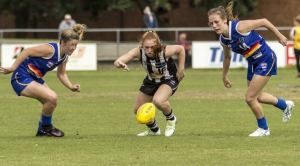 A new team has moved to top spot on the TAC Cup Girls ladder after Round 3.

TheCalder Cannons have claimed top-of-the-ladder status, cruising to a third straight win with a 108-point defeat of the Western Jets. The Cannons enjoy a superior percentage (374%) to fellow undefeated sides the Murray Bushrangers (368%) and Geelong Falcons (201%) with just two rounds remaining in the season.

The team on top of the ladder at the end of Round 5 will be crowned premiers, with Murray and Geelong meeting in what is the game of the round this week to see who will challenge Calder for top spot going into the final matches on Good Friday.

The undefeated run of Murray looked shaky in Round 3 as it trailed by four points at quarter time against Gippsland, but the Bushrangers wrestled the lead back in the second term and went on to record an eight-point win. Murray dominated the scoring after quarter time but inaccuracy cost them a bigger winning margin, kicking only three goals from 11 scoring shots. Chelsea Knight, Rebecca Webster and Grace Egan were among the best for Murray, while Tyla Hanks and newly signed Cranbourne Swisse VFL Women’s recruit Holly Whitford were named best for Gippsland.

Geelong surprised Dandenong in the first term at St Joseph’s, racing to a 22-point lead in the battle of the two undefeated teams. The Stingrays bounced back from a scoreless first term to cut the margin to just seven points at half time, but the home side then produced another three-goal term - like the opening stanza - to return to a 22-point lead and were able to hold on in an even final term for a 29-point win. Denby Taylor kicked three goals for Geelong and Paige Sheppard two, with Lucy McEvoy their best. Shaneece Stratton and Sophie Phillips were best for Dandenong.

Calder led from start to finish in a Wednesday night fixture against the Western Jets, with Chloe Molloy the star with five goals. The basketball convert kicked three second-term goals as the Cannons rocketed to a 44-point half-time lead. Molloy had plenty of support up forward with Monique Conti, Chloe Hodgson and Georgia Patrikios all kicking two goals, as the Cannons jumped to top spot on the ladder. Maddison Field was the only goalkicker for the Jets, with Katarina Rebuffo and Aleesha Hobbs their best players.

-      It was back-to-back wins for the Northern Knights, defeating the Sandringham Dragons in a two-point thriller at Frankston Oval. Northern jumped to a 13-point lead early in the third term and were able to hold on for the win despite Sandringham kicking the final two goals of the game.

-      The Greater Western Victoria Rebels recorded win number two for the season with a five-point victory over the Bendigo Pioneers. The Pioneers hit the lead for the first time in the match early in the final term, but Faith McKenzie regained the lead for the home side to see the Rebels remain in seventh spot.

- Eastern Ranges returned to the winners list with a 27-point win over Oakleigh Chargers.