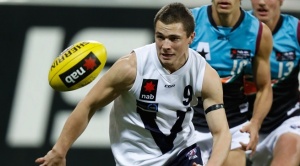 The revamped Vic Country Academy coaching panel for 2017 is “probably the best and most exciting in a Country program for some time”, according to new head coach Mat Battistello.

The 34-year-old has taken the reins of the Vic Country U18 program from Paul Henriksen, who guided Country to the 2015 NAB AFL U18 Championships Division 1 title in his first year in the job and is now a development coach with the Brisbane Lions.

Battistello has been involved in Country’s U16 program for four years – including as U16 head coach last year – and was an assistant coach at the GWV Rebels for five years. Having not played in the AFL, he’s been coaching for 12 years of his relatively young football life.

Battistello’s unique skill set will be complemented by having three TAC Cup head coaches as his assistants – Craig Black (Dandenong Stingrays), Leigh Brown (Gippsland Power) and Leon Higgins (Murray Bushrangers). Black, Brown and Higgins will bring knowledge of their own region’s players to the Country program, while Higgins was the coach of many in the current top-age group when it claimed the AFL U16 Championships crown in 2015.

Former Vic Country and Bendigo Pioneers coach Mark Ellis will be involved in the match committee, while ex-West Coast key-position player Mitch Brown will come straight from a 10-year career at the elite level into a welfare and development role.

“I think my greatest strength is probably in drawing on other coaches’ strengths and making sure their energy and effort gets directed to the right areas for the players,” Battistello said.

“I got involved in the Vic Country program to see what the end product of a draft-able player was like and take a bit of that knowledge back to the Rebels program. I think I’ve got my head around what the end product looks like now and how to best prepare players for the national carnival.

“I’m absolutely a student of the game, and having not played AFL I’ve been trying to find a good mix between the intellectual property that the ex-AFL players bring and the skills I bring.”

Brown’s intellectual property certainly spans a wide range of experiences in football. The 28-year-old was delisted by the Eagles last year after 94 AFL games and soon approached GWV – his former TAC Cup club – to determine how he could give back to the state system from which he was selected with pick no.16 in the 2006 AFL Draft.

“I’ve had a 360-degree look at the ins and outs of professional football, from some success to having injuries to lack of form and even the trade process and getting delisted,” Brown said. “I’ve collaborated all these experiences and I just want to pass my knowledge on.

“We tend to put all this emphasis on physical attributes and game-day strategies but I strongly believe that if you get the mental wellbeing of players to a high standard it greatly contributes to performance. This is an area of passion for me.

“My twin brother Nathan (ex-Collingwood and now St Kilda player) and I went through the Rebels program under Gerard FitzGerald (in 2005-06) and Fitzy was very much about our life development as well as football development.

“It was part of the reason why I was able to have a 10-year career at the highest level. I’m thankful for that and it’d be remiss of me not to give back and recognise how important that was in my development.”

Brown will also act as a match-day runner for Country and work with the program’s key-position players on the finer points of their craft.

An extended squad of over 50 of Country’s top prospects converged on Ikon Park for a three-day camp from April 12-14. The camp featured a variety of welfare programs driven by Brown and GWV Welfare Manager Brooke Brown and culminated on Good Friday with two trial games against Vic Metro teams.

AFL Victoria’s new Country Talent Pathways Manager Lee Fraser (former Murray Bushrangers Talent Manager) said the games would provide hopefuls “a chance to play at an even higher level with the very best under-age players in the state” and to put their names forward for selection in the final Country squad for the U18 Championships.

But Fraser doesn’t just see the Vic Country program as a pathway to the top for players.

“By having Craig Black, Leigh Brown and Leon Higgins involved in the program, we’re really tapping into the TAC Cup coaching structure for them to step up and provide these state academy programs,” Fraser said.

“Mat Battistello has been involved in the Vic Country program for a number of years and will take over the U18 coaching job from Paul Henriksen, who is now at Brisbane. That really demonstrates a clear pathway to the AFL for coaches as well as players.”