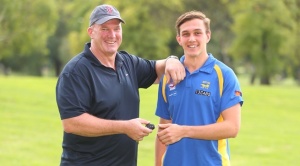 The 191cm top-ager can call on father Steve – a North Melbourne U19s player in the 1980s before serious knee injuries forced him to retire – and uncle Mick – a 300-game champion of the AFL – for advice as he learns his craft.

Mick Martyn won two premierships and two best-and-fairests across 287 games for the Kangaroos from 1988-2002 before playing 13 games with Carlton in 2003 and is known as one of the finest defensive stoppers of his era.

Mick’s older brother Steve isn’t short of football wisdom to impart upon James either. As the TAC Cup recognises the importance of learner drivers gaining experience on the roads during the Transport Accident Commission’s ‘Drive to the Game’ Round this weekend, James said regular car trips with his father were valuable learning opportunities.

“Driving in the car with Dad, he gives me the rundown on what I’ve been tasked to do before the game, and then after the game he tells me what I’ve done right and what I’ve done wrong and how to improve it,” James said.

“When I identify a problem with my game I’ll probably go to Mick to get his wisdom, but if he sees something specific that he has a way to fix, he’ll also come and help me out.”

Martyn may have strong key-defensive genes but he hasn’t always played in the back line. He was a ruckman until his U14 year at Newport Power – where Steve was one of the club’s founding executive members – before playing as a forward when he later moved to Essendon Doutta Stars.

While also playing some school football as a forward for Geelong Grammar last year, the Jets recognised Martyn’s potential to hold down a key defensive post.

“I came into Western’s U16 program and I suppose my competitiveness was the thing that prompted them to put me at full back,” James said. “I think I also just slide into the team nicely there because we’ve got a lot of good forwards.

“It’s not all just the surname, but it’s in the genes as well; I’ve got those instincts in the back line. Having an uncle who’s played 300 AFL games at full back obviously helps.”

Despite eventually being known as defenders, Steve and Mick actually followed a similar positional path to James, another reason why Steve is well placed to advise his son on those car trips.

“When we were growing up, Mick and I were ruckmen and forwards too,” Steve said.

“From my experience, I tell James to put in the hard yards and listen to advice from people who have been there and done that. To his credit, he works as hard as he can, and he can play ruck, forward and – being a Martyn – full back.”

* Photo: Steve Martyn hands his car keys over to son James ahead of the TAC's 'Drive to the Game' Round this weekend