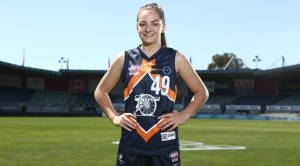 The Calder Cannons are one game away from claiming the first TAC Cup Girls premiership and basketballer Monique Conti is one of the players driving them to the ring.

The undefeated Cannons go into their final match against the Bendigo Pioneers at Rams Arena on Friday even on premiership points but 123 percentage points ahead of the second-placed Murray Bushrangers. The team on top of the TAC Cup Girls ladder after five rounds will be named premier.

17-year-old Conti helped Calder’s campaign start strongly, kicking three goals and being named her team’s best player in a 94-point defeat of the Gippsland Power in Round 1. The midfielder/forward has booted six goals in four games as the Cannons subsequently knocked off the Eastern Ranges (by 11 points), Western Jets (98) and Oakleigh Chargers (53).

Conti started her football journey at Essendon Doutta Stars before later crossing to play with Melbourne Uni and being named on a wing in the 2015 Youth Girls All Australian team.

But all the while, the talented athlete has been making an even bigger name for herself in basketball.

Conti was part of the Australian Sapphires team that won gold at the 2016 U17 World Championships – also being selected in the tournament’s all-star five – before being named the WNBL’s Rookie of the Year for the 2016-17 season while playing for the Melbourne Boomers.

“I started basketball when I was about five and footy when I was about 11,” Conti said at TAC Cup Fitness Testing Day in March, where she produced the best result in both the 20m sprint and agility test among TAC Cup Girls players.

“My brother played local footy for Aberfeldie, so I just thought I’d give it a go too. I was pretty good at it and I enjoyed it, so I just kept going.

“My strengths would probably be my speed and agility, and my use of the ball. Football and basketball complement each other a lot, especially from the basketball to the football – being able to step around defenders and that sort of stuff – and then the toughness of footy comes into my basketball.”

Conti had no shortage of role models running around in the recent AFL Women’s competition and highlighted dynamic Carlton and Darebin VFL Women’s forward Darcy Vescio as a player she particularly liked to watch.

Conti has signed with Melbourne for the 2017-18 WNBL season and hopes to play US college basketball in the coming years, but she still has an eye on a potential AFLW career in future.

“I haven’t put the footy down since I started playing,” Conti said.

“I’ve just tried to juggle both sports for as long as I can and the Cannons have been really flexible with me. They understand the workload from my basketball and have helped me out a lot with that. I think the support base around football and basketball has kept me engaged in footy and led to me being at the Cannons.

“I want to maintain both sports for as long as I can and I don’t need to make a decision just yet. I’ve achieved pretty well in both sports, so I don’t know what I’m going to do!”

While she won’t play for Calder on Friday due to AFL Academy duties, being a key part of a TAC Cup Girls premiership campaign might be the next big sporting achievement to swing Conti’s thinking one way or the other.