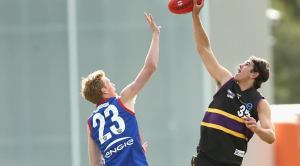 The preliminary Vic Country Academy squad of 65 players has been released.

This initial group will participate in Vic Country’s April 12-14 camp at Ikon Park culminating in two trial games against Vic Metro teams on Good Friday at 12.30pm and 2.30pm (see teams below). The initial Vic Metro squad will be announced in the next fortnight.

The 65-player Country squad will then be reduced in the lead-up to the NAB AFL U18 Championships, in which Country will face the Allies on Sunday June 11 (Blacktown, NSW), Vic Metro on Saturday June 24 (venue TBC), Western Australia on Friday June 30 (Etihad Stadium) and South Australia on Wednesday July 5 (Simonds Stadium).

The Geelong Falcons have the most players in the squad with 15, ahead of the Dandenong Stingrays with 13, the Bendigo Pioneers with 11, the Murray Bushrangers and Gippsland Power with 10 each and the GWV Rebels with six.

The over-age players selected in the squad are: Bailey Morrish from Dandenong; Hayden Elliot and Joshua Jaska from Geelong; Sean Masterson and Julian Patterson from Gippsland; Lloyd Meek and Callan Wellings from GWV; and Ben Paton from Murray.

Patterson is the tallest player in the squad at 203cm, while Pioneers goalkicker Brent Daniels is the shortest at 172cm.