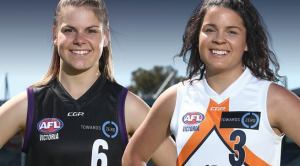 And then there were two.

Two clubs remain in contention for the inaugural TAC Cup Girls title, with Calder Cannons and Murray Bushrangers both entering the final round of action undefeated.

123% separates the two teams, with Calder in the box seat, needing to win to all but guarantee the title. Murray will know the equation going into its final game, with Calder facing Bendigo Pioneers in the opening game of the Good Friday TAC Cup Girls finale at RAMS Arena at 12.30pm, while the Bushrangers wait till 4pm before facing Oakleigh Chargers. The team that finish on top of the ladder will claim the title.

Bendigo claimed its first scalp in Round 4 defeating Gippsland Power, while Oakleigh is yet to record a win.

Calder started with a four-goal opening term against Oakleigh, to help lay the foundations for a 53-point victory. The Cannons have enjoyed a 64-point average winning margin across the four games to date, with the Eastern Ranges coming closest to defeating the undefeated ladder-leaders, suffering an 11-point loss after leading at half-time in Round 2.

A number of teams this week – including Calder – will be without AFL Academy players, with a camp currently taking place in Melbourne for the Academy team.

Watch highlights of Round 4 TAC Cup Girls below: