Metro’s mix of old and new 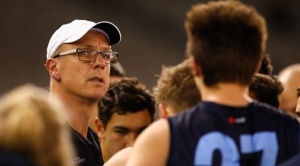 Martin Allison first coached the Vic Metro Academy for a year in 2013, and with the program now undergoing change at the top, his steady hand has been passed the “keys to the Ferrari” once again.

Allison (pictured) took a talented Vic Metro group to within one win of the 2013 NAB AFL U18 Championships crown, narrowly losing only once – to eventual title-winners South Australia in the carnival’s defining match.

Back then, he was guiding the likes of the subsequent top three picks at the 2013 AFL Draft – Tom Boyd (ex-Eastern Ranges), Josh Kelly (ex-Sandringham Dragons) and Jack Billings (ex-Oakleigh Chargers) – in their football development.

With new blood at the top, Martin Allison’s experience in the Metro program will be highly valued.

He previously took the Calder Cannons to TAC Cup premierships in 2009 and 2010 before coaching Metro in 2013. Allison then worked at Essendon developing the likes of AFL father-son prospects Jake Long and Tom Wallis as well as the club’s Irish recruit Conor McKenna before returning to Metro as an assistant coach under David Flood last year.

When Flood – named the 2016 U18 All Australian coach for taking Metro to last year’s U18 Championships title – moved on, Allison was called on to assume the driver’s seat.

“I see myself as one of the luckiest coaches in Victoria,” Allison said. “I’m given the best players in metropolitan Melbourne, and they listen, they want to learn and they want to get better.

“I compare it sometimes to someone giving me the keys to a brand new Ferrari and they say: ‘Drive this around for a couple of months, go as fast as you like, go as far as you want, push it beyond limits and give the keys back when you’re finished – just don’t break it!’”

Martin Allison said this year’s Metro model isn’t exceptionally tall or fast, but that quick ball movement would be the name of its game. It reflects a subtle change in his approach to coaching since he last held the reins at Metro.

“I’d like to think my style has changed,” Allison said. “I’m watching AFL footy evolve and I think we need to evolve with it, so we want to be a more attacking team.

Martin Allison said players such as Western Jets midfielder/forward Cameron Rayner and Eastern teammates Joel Garner and Adam Cerra were among those to have impressed him early in Metro’s training program.

And Brett Allison backed his head coach to get the best out of them.

“Marty’s a real people person and a really good communicator,” he said. “He builds good relationships with the players, is able to talk to them on their level and from what I’ve seen they feel really comfortable with him.

“He knows the system pretty well and I thought with myself coming on board and not having a great deal of experience in how it all runs, it was pretty important to have some people involved who have had the experience and know how to run the program.”

Allison said his experience of developing players in the AFL system – at Sydney from 2001-09, North Melbourne from 2010-13 and Melbourne from 2014-16 – meant he can prepare Metro players for exactly what they’ll face if they eventually join AFL clubs.

“I think I have a good idea of the challenges players face once they get to an AFL club,” Allison said.

“That’s one of the things I hope to make a difference in – to make it easier for them to transition from the TAC Cup to AFL level. It’s a pretty big step and I think a lot of the players feel they have a good understanding of how different it’ll be, but in reality that’s not the case.”

Working under Paul Roos in a successful era at the Swans, Brett Allison played a part in developing players such as Nick Malceski (ex-Eastern) and Nick Smith (Oakleigh) into AFL premiership players and All Australians.

At Melbourne, he worked with recent high draft picks Christian Petracca (ex-Eastern), Angus Brayshaw (Sandringham) and Sam Weideman (Eastern), who are starting to form the core of one of the AFL’s most promising teams.

This year’s Vic Metro representatives will hope both Allisons can help them get to a similar position in years to come.