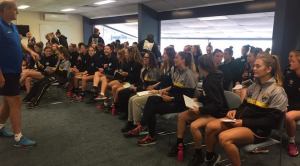 The initial squads for the 2017 AFL U18 Women’s Championships have been released.

After the inaugural TAC Cup Girls season was completed on Good Friday - with Calder Cannons crowned the premiers after finishing atop of the ladder at the end of five rounds – squads for Vic Country (35 players) and Vic Metro (31 players) were announced.

Scott Gowans will lead Vic Country for the second year, with the Diamond Creek VFL Women’s coach hoping to help his side take the next step this year. Country will field a more experienced list, with eight AFL Academy players featuring. TAC Cup Girls runners-up Murray Bushrangers and Dandenong Stingrays boast the most representatives with nine apiece, followed by Geelong Falcons and GWV Rebels with five, Gippsland Power four and Bendigo three.

Vic Metro will this year be led by new coach Andrew Shakespeare - former coach of the Northern Knights in the TAC Cup and now Development League coach in the VFL with Box Hill Hawks. The Metro squad features seven players each from the inaugural TAC Cup Girls premiership side Calder Cannons and the Eastern Ranges, with Northern Knights and Sandringham Dragons both contributing six players, Western Jets four and Oakleigh Chargers one. Metro will aiming for a third straight title, after wins against Western Australia (2016) and Queensland (2015).

Both squads will take part in an induction day Saturday (April 22) at Ikon Park, before meeting in Round 1 of the Championships on Saturday June 17 at Simonds Stadium. The Championships will then continue on the Gold Coast from July 10.