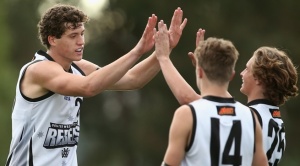 The GWV Rebels left Calder as the TAC Cup’s sole winless club after notching their first victory of 2017 by 80 points against the Cannons in Round 4.

In a battle of the only two teams still with 0-3 win-loss records at Rams Arena on Sunday, the ninth-placed Rebels powered away from a particularly inaccurate Calder outfit that could only manage a score of 5.21 (51). Even up until three-quarter time, the Cannons had more scoring shots than GWV but trailed by 38 points.

Earlier in the double-header at Rams Arena, the Murray Bushrangers (3rd, 3-1) accounted for the Northern Knights (5th, 2-2) by 26 points. The Knights started well to hold an eight-point lead at quarter time but Murray’s seven-goal-to-two second term was the game’s defining period, setting up a 21-point advantage at the main break.

The Oakleigh Chargers (4th) brought up their third win of the season by 34 points against the Bendigo Pioneers (11th, 1-3) in sloppy conditions at Queen Elizabeth Oval on Friday night.

Oakleigh’s conversion in front of goal was a key factor in the result, having only four more total scoring shots but managing to extend its lead at every change. Key forward and Chargers captain Toby Wooller formed an effective double act with bottom-age small forward Daniel Scala (four goals each) to sink the home team.

On Saturday at Frankston Oval, the Sandringham Dragons (2nd) continued their undefeated start to the season in overcoming the Dandenong Stingrays (7th, 2-2) by 21 points.

The Dragons trailed by five points at the long break but kicked eight goals to three in the second half to run away to victory. Aaron Trusler produced his second straight four-goal performance for the winners, while 2016 TAC Cup premiership captain Hamish Brayshaw (28 disposals and seven clearances) and Lucas Barrett (25 and seven) started it all in the middle.

The Geelong Falcons stayed ahead of Sandringham at the top of the ladder with their fourth win on Saturday, having more than three times the scoring shots (32 to 10) than the Eastern Ranges (10th, 1-3) in a 52-point triumph at Bayswater Oval on Saturday.

Lively small forwards David Handley (four goals) and Gryan Miers (three) once again did the damage inside 50, with Bayley Cockerill joining James Worpel and Cassidy Parish in running riot through the midfield.

Meanwhile, the Western Jets (6th, 2-2) snatched victory from the Gippsland Power (8th, 1-3) in the dying moments of Saturday’s game at Burbank Oval.

The Jets rallied from 21 points down at the last change with four unanswered final-term goals – two to Connor Thar and the go-ahead major to Jack Noonan 23 minutes in – to pip the Power by five points.