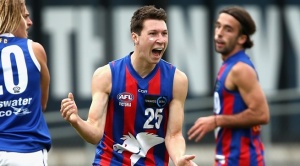 The Oakleigh Chargers have rebounded from a humbling first-round loss to win three straight games on the back of suffocating pressure.

Last year’s preliminary finalists were completely outplayed by 2016 premiers the Sandringham Dragons in Round 1, suffering a 54-point loss.

In the week following the defeat, Oakleigh Talent Manager Craig Notman labelled the performance “dismal”, saying the Chargers were beaten by “a well drilled unit” and were keen to quickly make amends.

And make amends they have.

One of the most notable statistical improvements in Oakleigh’s three victories over the Eastern Ranges (by 21 points), the Calder Cannons (42 points) and most recently the Bendigo Pioneers (34 points) has been in its total tackle numbers.

The Chargers laid just 57 tackles in Round 1 – eight less than the Dragons – but have increased that number to 87, 98 and 112 against the Ranges, Cannons and Pioneers respectively.

Xavier O’Neill (pictured) also missed Round 1 but came into the line-up the next week before applying eight tackles against Calder in Round 3. He backed that up with 11 in wet conditions against Bendigo, when the Chargers out-tackled the Pioneers by 47.

However, the two biggest tacklers in the TAC Cup in Round 4 were O’Neill’s teammates Jack Higgins and Lachlan Bugeja with 15 and 14 tackles respectively.

Bugeja impressed as a bottom-ager but Notman would likely have been most pleased by the efforts of top-age NAB AFL Academy midfielder Higgins. Earlier this year, Notman said he was looking for the East Malvern product to “step up his leadership” in 2017.

“Jack certainly leads in terms of the way he goes about his training – he’s as good as we’ve got here – but what I’m looking for is for him to drag some of the other boys up to a similar standard,” Notman said.

Higgins’ tackling last round would have set the perfect example for his teammates.

Round 4 keys to victory:

300: The Geelong Falcons became the first club to notch 300 TAC Cup wins when they defeated the Eastern Ranges by 52 points. The Falcons now have an overall record of 300 wins, 184 losses and five draws from 489 games since joining the competition in 1992. Second on the list of total wins is the Dandenong Stingrays with 296.

26: In a game decided by only six points, the Western Jets’ ability to win crucial contests shone through in their victory over the Gippsland Power. Many statistical categories were even but Western won the contested possession count by 26, led by bottom-age St Bernard’s product Xavier O’Halloran with a game-high 14.