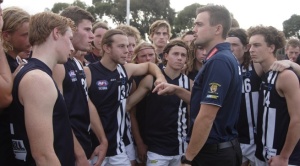 The Geelong Falcons are the last remaining undefeated team in the TAC Cup following Round 5.

The ladder-leaders notched their fifth victory in a hard-fought clash with the Oakleigh Chargers (4th, 3-2) at Warrawee Park. The Chargers led by six points at quarter time, but the Falcons built a nine-point advantage by the main break and then accelerated away with five goals to two in the second half to prevail by 31 points.

Geelong half forward Mitch Chafer was a standout in the win with 24 disposals and one goal, Harry Benson was tough in the clinches with 20 disposals, 10 tackles and seven clearances, and Gryan Miers moved to the top of the TAC Cup goalkicking table with three majors (15 for the year).

The Murray Bushrangers (4-1) moved past the Sandringham Dragons into second spot on the ladder following a 62-point defeat of the Western Jets (9th, 2-3) at Norm Minns Oval.

The Jets were within 15 points at half time before the Bushrangers exploded with nine goals to two in the third quarter. 196cm key forward Daniel Johnston kicked three of his six majors in the term and also racked up 21 disposals, five marks and seven clearances for the match.

Third-placed Sandringham, meanwhile, suffered its first loss of 2017, going down by 69 points to the Gippsland Power (7th, 2-3) at Trevor Barker Oval.

Gippsland kept the Dragons at arm’s length for three quarters – going into the final term with a 20-point lead – before booting eight unanswered goals to close out the game. Will Stephenson kicked two of them (four for the match), while NAB AFL Academy midfielder Aidan Quigley starred with 24 disposals, 13 tackles and a major for the victors.

A late go-ahead goal to Jack Petruccelle sealed a thrilling triumph for the Northern Knights (5th, 3-2) over the Bendigo Pioneers (11th, 1-4) at Queen Elizabeth Oval.

Bendigo’s inefficiency in front of goal proved telling, the Pioneers losing by three points despite having seven more scoring shots. Northern’s defence held up well though, with backmen Mitchell Andrews (32 disposals, 12 marks and 11 rebound-50s) and Ethan Penrith (22 disposals, seven marks and seven rebound-50s) among the best players for the Knights.

The sixth-placed Dandenong Stingrays also recorded their third win for the year, consigning the Calder Cannons to a fifth straight defeat to the tune of 38 points at Shepley Oval.

Five unanswered goals in the first quarter – three of them to Riley D’Arcy – proved match-defining for the Stingrays, with the defensive work of 19-year-old Mason De Wit (24 disposals, seven marks and six rebound-50s) influential as well.

Leading by just one point at the main break, the Rebels reeled off 10 goals to two in the second half with Jordan Johnston (six goals) and captain Callan Wellings (four) instrumental in front of goal.