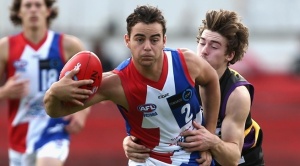 They may have only won two games this year, but the Power served the Sandringham Dragons their first loss in comprehensive fashion in Round 5 and have only been defeated by 16, 24 and five points in Rounds 1, 2 and 4 respectively.

This follows a 2016 season in which Gippsland missed the finals but finished with wins in four of its last five matches.

Many of the club’s bottom-agers from last year played plenty of football together and it seems the benefits are being seen now. Against the Dragons and in Round 3 when the Power beat the Bendigo Pioneers by 26 points, several of those now top-agers drove their teammates to victory.

Gippsland recorded fewer disposals and marks than their opponent in both wins, but its effort to win the crucial contests that decide games of football has shone through.

The Power managed only 265 disposals against Sandringham but won 140 contested possessions (12 more than the Dragons) and laid 104 tackles (15 more).

NAB AFL Academy midfielder Aidan Quigley led the way with team-highs of 24 disposals, 12 contested possessions and 13 tackles, while he also won five clearances and kicked a goal. 169cm hard-nut Will Stephenson booted four majors to go with 21 disposals, 11 contested possessions and eight tackles, while Callum Porter and Matt McGannon were also among Gippsland’s best at the coalface.

All appeared at least eight times as bottom-agers in 2016 along with the likes of Nick Hogan (pictured), who starred with 32 disposals, 16 contested possessions and nine clearances against Bendigo.

Power head coach Leigh Brown could see his young players had gelled through 2016 when he spoke of them earlier this year.

“We had a good group of bottom-agers last year who all came through together and we hope they can lead the way this year,” Brown said. “The boys will take a lot of confidence out of finishing last year well and we’ve seen in previous years that can hold the next season’s group in really good stead.”

Round 5 keys to victory:

11: The Northern Knights conceded 19 more inside-50s to the Bendigo Pioneers but still managed to prevail by three points thanks to a stout defence. South Morang junior Mitch Andrews was the round’s leading rebounder with 11 rebound-50s for the Knights, to go with his 32 disposals and 12 marks.

40: The Dandenong Stingrays’ 38-point victory over the Calder Cannons was built on stoppage wins, with a +10 clearance advantage stemming from dominating the hitout count by 40. Bailey Williams (24 hitouts), Tom De Koning (18), Angus Paterson (14) and Tom Hogan (11) all contributed in this regard.