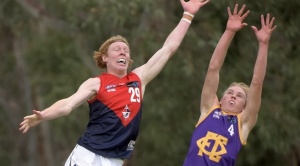 All 12 TAC Cup teams have a win on the board in 2017 after the Calder Cannons defeated the Gippsland Power in Round 7.

The Cannons extended their lead at every change at Morwell Recreation Reserve to emerge with a 32-point victory after losing their six previous games by 19 points or more. The ninth-placed Power, meanwhile, dropped to a record of 2-5.

The Oakleigh Chargers (3rd, 5-2) were dominant in an 89-point win against the Dandenong Stingrays (8th, 3-4) in the clubs’ VFA heritage match at Shepley Oval.

Both teams wore the colours the former Oakleigh and Dandenong VFA clubs donned before bowing out of the competition in 1994 (pictured), with the Chargers doing the purple and gold strip proud in keeping the Stingrays to five goals for the game. Up the other end, Jack Higgins, Daniel Scala and Toby Wooller were all dangerous inside 50 for Oakleigh, booting four majors each.

* CLICK HERE to watch a full replay of Dandenong vs Oakleigh

The top-of-the-table Geelong Falcons made it seven wins from seven games with a 65-point triumph over the Northern Knights (5th, 4-3) at Simonds Stadium.

The Knights were within four points at quarter time before the potent Falcons forward line exploded with seven second-term goals to one to put the match away. Key forward Adam Garner booted two of those majors (four for the match), while Cassidy Parish (33 disposals and 12 clearances), Lachlan Noble (28 and five) and Bayley Cockerill (28 disposals and seven inside-50s) were Geelong’s prime movers.

The Murray Bushrangers (6-1) maintained second position behind the Falcons with a 23-point victory over the Sandringham Dragons (4th, 4-3) at Norm Minns Oval.

The teams were tied at the first change but the Bushrangers established control with four unanswered goals in the second quarter through Hudson Garoni, Jy Lane, Riley Bice and Ryan Bruce. Bottom-age AFL Academy member Zane Barzen was also important for Murray with 17 disposals, nine marks and a goal.

The Eastern Ranges (7th, 3-4) jumped into the top eight by accounting for the Bendigo Pioneers (10th, 2-5) to the tune of 29 points at Box Hill City Oval.

The Ranges set up their win with a six-goal-to-two first quarter – bottom-ager Cody Hirst kicking two of those majors (and three for the match). Tom North enjoyed a monster day for Eastern, racking up 43 disposals, 17 contested possessions, 12 clearances and three goals to be the game’s most influential player.

In Round 7’s final match, the GWV Rebels (6th, 3-4) prevailed by eight points in a see-sawing tussle with the Western Jets (11th, 2-5) at the newly redeveloped Eureka Stadium.

The Rebels trailed by 10 points at three-quarter time but piled on the first four goals of the final term through Aiden Domic, Angus Gove, Jack Antonio and then Jordan Johnston to roll over the fading Jets.