Penrith a Next Gen prospect 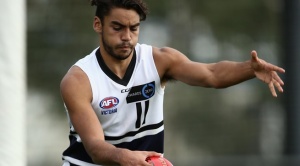 The indigenous West Preston product is zoned to Carlton’s Next Generation Academy (NGA) and was invited to attend the Blues’ training camp on the Gold Coast in December.

Penrith impressed as a 179cm defender for the Knights in 2016, averaging 13 disposals and four tackles per game in 17 TAC Cup matches. He also won the club’s Best Defensive Player Award before being included in its leadership group for 2017.

Penrith’s speed and ability to run and carry the ball from the back line has caught the eye already this season – he was instrumental in Northern’s victories over the Eastern Ranges in Round 3 (17 disposals, 13 tackles and a goal) and the Bendigo Pioneers in Round 5 (22 disposals and seven rebound-50s).

Carlton, however, would probably prefer he stayed under the radar. The NGA rules give AFL clubs the ability to automatically sign their nominated Academy players as Category B rookies if they slip through the NAB AFL and Rookie drafts.

Last year, Eastern Ranges forward Tristan Tweedie was added to the Western Bulldogs’ rookie list when Hawthorn elected not to exercise its right to sign him under the rules, while Essendon signed its NGA nomination Ben McNiece – a recent AFL debutant in the ANZAC Day game against Collingwood – from its Peter Jackson VFL team.

“During the off-season I trained with Carlton for a couple of weeks and then I went to the Gold Coast with them on their pre-season camp,” Penrith said. “It was hot and pretty tiring – long days waking up at 6am and then by the time you get into bed at 8pm, you’re straight asleep.

“It was an eye-opener and good exposure, because I’ve got to prepare myself for if I hopefully make it (to the AFL). I was with the first-year Blues players and they had to manage their load a bit so they didn’t do full sessions, but the intensity was right up. As soon as I got home, I just slept!

“It made me think it’s important to know what to expect, but then also that I could actually live that lifestyle.”

Among Penrith’s goals for 2017 is to be part of a Northern team that improves on its 12th placing (4-14 record) from last year.

But on an individual level, Northern Talent Manager Rhy Gieschen suggested earlier this year that Penrith is likely to be watched by plenty of AFL recruiters.

“Ethan had a really good season last year predominantly as a rebounding, running small backman,” Gieschen said. “He possesses an elite sidestep and burst from the contest, and really good run-and-carry ability. He’s an exciting type of player and will definitely catch the eye throughout the course of the year.”

That’s probably not exactly what the Blues would want to hear.