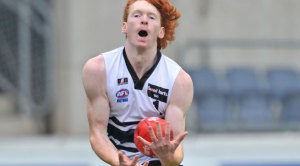 Despite finishing out of finals contention with just three wins last year, the Knights received a boost with Nick Vlastuin (Richmond), Aidan Corr (GWS) and Nathan Hrovat (Bulldogs) all selected in the first round of the NAB AFL Draft.

This season, Bello is hoping for more draft success but says his groups’ development can be improved by winning games of football.

“Development certainly comes a lot easier when you’re winning and I think the players can learn a hell of a lot more when they’re enjoying their footy,” he said

“At the minute we could throw a blanket over 30 of the boys and that’s what has really impressed me, is our depth.”

The Knights have three members in the AFL AIS Academy Squad in Ben Lennon, Cameron Conlon and Marcus Bontempelli, with the trio expected to command plenty of attention when available for selection.

Jake Kalanj and Julian Soccio are also names to watch this season, having been selected in the preliminary Vic Metro Academy Squad.

“They’re both classy midfielders, with good size and should be strong contributors this season,” Bello said.

Returning to the Knights under the 19-year-old rule is another pair of likely types in Tom Grimes and Matt Haynes.

Grimes, the brother of Melbourne captain Jack and Richmond defender Dylan, possesses wonderful versatility and should provide plenty of leadership this season.

Haynes is another versatile prospect and after some eye-catching performances in last year’s NAB AFL U18 Carnival could yet become one the competition’s best.