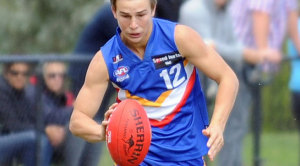 The Eastern Ranges will unveil arguably the most experienced squad in the competition when the TAC Cup kicks off this Sunday at Visy Park.

The Ranges welcome back 26 boys who played as 17-year-olds last year and will be looking for their experience to lead to the region’s improvement this season.

With only three victories in 2012 and with no player selected in the NAB AFL Draft, the Ranges are searching for a competitive showing this season.

“We want to be a more competitive outfit than we certainly have been over the past two seasons,” talent manager Anthony Parkin said.

“I’m not just talking about winning games but staying in matches for longer.”

The Ranges also boast one of the most talked about draft prospects in the TAC Cup, power forward Tom Boyd.

But with Boyd unavailable for several games in the first few weeks of the season, and athletic forward Jack Edwards still recovering from a knee reconstruction, the Ranges will be relying on their smalls for scoreboard pressure in the early rounds.

Live-wire Mitch Honeychurch (pictured) is likely to be one of those Ranges coach Darren Bewick looks to in the forward half.

“Mitch is an aggressive player who is super competitive for each and every minute of every match,” Parkin said.

Honeychurch and Ben Cavarra were two of the shinning lights for the region last year and are expected to be key planks in its resurgence.

Cavarra, a pint-sized left-footed on-baller capped a stunning season with the region’s best and fairest award and will have a significant say in how they fare this year.

Other players of interest include versatile utility Daniel McStay and running defender Mitch Keedle, who Parkin said had come on in leaps and bounds over the pre-season.

Set for his fourth season at the helm, Bewick said the Ranges had a built a solid list of players who have been transitioned well from their U15 and U16 programs.

“We think our top-age kids will provide plenty of leadership and give the younger guys plenty of direction on how we want our footy played,” Bewick said.

“We have a tough start to the year which will give our guys a great opportunity to impress.”