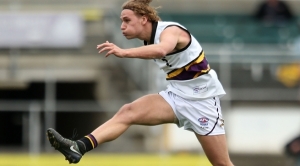 The most striking statistical differential in Geelong’s 37-point win was in the hitout numbers. Sean Darcy (34 hitouts) and Hayden Elliot (19) helped the Falcons to a +30 advantage opposed to North Ballarat pair Lloyd Meek and Todd Lawrence (11 hitouts each), leading to Geelong’s +22 edge in contested possessions.

Sandringham’s willingness to link up with handballs was a key to its two-point win. The Dragons recorded 45 more handball-receives than the Ranges, who much preferred to move the ball by foot. Corey Lyons (13 handball-receives), Jack Scrimshaw (13) and Andrew McGrath (12) were the prime-movers for the victors.

Oakleigh simply dominated time in possession in its 106-point triumph. The Chargers restricted Calder to just 236 disposals for the game while racking up 382 of their own, led by defensive marshal Jordan Ridley (28 disposals, 12 marks) and classy midfielders Campbell Lane (27 disposals) and Lachlan Walker (25).