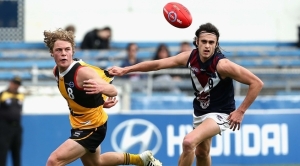 Sandringham maintained a stranglehold on time in possession during its 61-point victory. The Stingrays essentially kept up with their opponents in the contests, but once the Dragons gained control of the ball they rarely gave it up, recording 148 more uncontested possessions than Dandenong.

The stats would indicate Oakleigh perhaps should’ve prevailed by more than six points. The Chargers enjoyed an advantage of +119 in the disposal count, +21 in marks, +16 in contested possessions and +7 in inside-50s, as well as recording six more scoring shots, but the work of North Ballarat hard-nuts Callan Wellings (six clearances), Hugh McCluggage (five) and Willem Drew (five) kept the Rebels in the game.

They won the clearance count by eight, and if it wasn’t for Oakleigh’s Vincent Adduci (24 disposals, four clearances), Ed Phillips (24, four) and Campbell Lane (32, three) evening things up at the stoppages, this result could’ve been different.