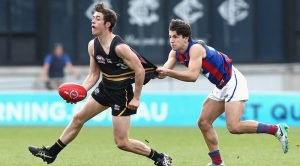 Murray dominated the aerial battle too, taking 15 more contested marks than the Chargers thanks mostly to Ryan Garthwaite (four contested marks) in defence and Todd Marshall and Lachlan Tiziani (three each) in attack.

Taranto (five contested marks) was also a match-winner due to his aerial ability, while big men Hayden McLean (three) up forward, Lachlan Filipovic (two) in the ruck and Max Williams (two) down back also imposed themselves on the contest.