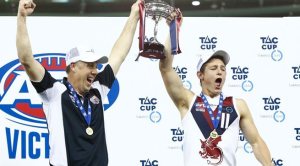 Sandringham claimed the 2016 TAC Cup premiership after beating the Murray Bushrangers by 17 points at Etihad Stadium on Sunday.

The Dragons led at every break throughout the tight clash, and fought back with some classy football in the last quarter after Murray took the lead late in the game.

Barnard said he was extremely happy with his side’s spirit.

“Superbly proud of the players – the way they pushed to the end was just magnificent,” said Barnard.

“Our guys’ ability to follow the game plan, play for each other (and) persist – which has been our motto the whole finals series – just persist, trust the system – was just outstanding.

“There was plenty of times in the game we could have really given up, they were all over us at certain times…All credit goes to the players.”

Andrew McGrath, who has been touted as a potential first round draft pick, was named best afield, after an impressive 38 disposals and eight clearances.

“Every recruiter and every AFL coach want to see people play under pressure, that’s why they value it so much – more than your average game,” said Barnard.

“I thought he (McGrath) was super today…he played a fantastic game and thoroughly deserved the medal.

“I would think he’s in the mix (to go as a first round draft pick).

“He’s had a massive year really, he’s a level-headed guy, nice parents, so he deserves all the credit he gets.

“He has the ability to create overlap run and lateral movement, especially when the game’s a bit tight. I thought he was outstanding today.

“He was able to cover the ground quickly and he’s also got the ability to play in multiple positions – which is so vital now for AFL players.”

The Dragons’ coach was also quick to highlight other key players such as Tim Taranto, who applied constant pressure all day, and Ari Sakeson who played a key role in shutting down the opposition.

Max Williams, along with Sandringham’s whole defensive unit, were also highly praised by the coach.

Barnard also provided praise for his coaching staff, who played a big part in preparing his side for their successful season.

“We started with in November with 110 players which, logistically, is pretty hard,” said Barnard.

“We have an average of 10 player changes every week, so the program has its challenges.

“But we have a fantastic coaching staff.

“The way they educate their players and coach all the players regardless of where they sit on the list, has been really strong for us.”

The Sandringham premiership win handed the Dragons their third flag in the club’s history.

* CLICK HERE for the full result, goalkickers and best players.