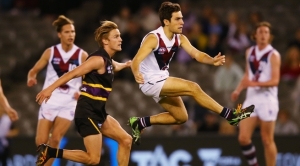 Sandringham’s defence often came to the rescue of its midfield on Sunday. Murray’s on-ball division – led by Will Brodie (22 disposals, 12 contested possessions, seven clearances) and James Cousins (20, nine, six) – helped the Bushrangers win the contested possession count by five, the clearance count by eight and inside-50 count by seven.

Jack Scrimshaw was composed and skilful when played mostly in defence in the first half, typifying Dragons head coach Jeremy Barnard’s clear game plan to control the ball and the tempo of the match in defence – often by handball – before finding the right option moving forward.

But after the main break, Sandringham lifted its intensity around the contests too. McGrath had 28 disposals in the second half and finished with a game-high eight clearances, while Taranto’s 11 tackles was clearly the highest tally for the match. Scrimshaw moved forward and took advantage of their work as well, booting a goal and setting up two others.

The Dragons claimed the 2016 TAC Cup flag by absorbing what Murray threw at them and counter-attacking the best way they knew how.