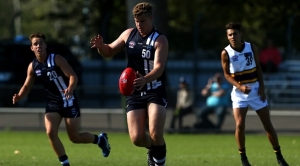 Sean Darcy has emerged as one of the top ruck prospects at the upcoming NAB AFL Draft after refining his craft with the Geelong Falcons in 2016.

The 201cm Cobden product played with the Falcons while attending Xavier College this year and was one of only two recognised TAC Cup ruckmen – along with Max Lynch of the Murray Bushrangers – to be invited to the recent NAB AFL Draft Combine.

Darcy averaged nine disposals and 27 hitouts per game in five TAC Cup home-and-away matches in 2016, and also represented Vic Country in three games at the NAB AFL U18 Championships.

taccup.com.au talked to Darcy at the Draft Combine.

“I just say I’m competitive, I’ve got a good attitude and I’m a people person – I like talking to people and get along with anyone, really. (In terms of ruck craft,) I’ve had a coach in Luke Primus at Geelong who’s been pretty good with me and then at Vic Country I had Darren Flanigan who taught me a lot as well. Hitting it down to the midfield – that’s what I enjoy.”

“‘What’s the funniest Snapchat you’ve sent?’... I wasn’t expecting that one!”

“Most of it, really. The AFL’s a whole different standard. Probably getting around the ground – my endurance. I probably need to work on my marking, my kicking and positioning too.”

“I love to watch (GWS’) Shane Mumford because he probably helps out his midfield the best. He hits each opposition midfielder and creates a path for his own midfielders. Most midfielders walk taller around him. Him and probably (North Melbourne’s) Todd Goldstein – they’ve been the best ruckmen the last few years.”

“I was a bit up-and-down at the start of the season. Once I had about six games under my belt, I thought I played pretty consistently from then on. Also, being named for Vic Country, I got a lot more confidence out of that. You’re not really sure what it’s going to be like (at the U18 Championships), but I played alright in the first game so I got a bit more confidence out of that. I kept playing alright so I thought: ‘Yeah, I can handle this.’”

“Probably the win against Murray (in Round 9 – 19 disposals, 40 hitouts, six tackles, five inside-50s). I won most of the hitouts which was good, but when the ball was around the ground I was involved for the whole game, not just a quarter.”

“(Northern Territory ruckman) Tony Olango from the Allies – he was a bit difficult because he has a real vertical leap and pretty long arms. He was the hardest one to work out. Lachlan Filipovic from Sandringham – he towelled me up in the second half of the Preliminary Final loss. I was a bit disappointed with that one.”

- Jack Henry: “He’s just versatile. You can play him anywhere and he’ll have a good game. He can play as a strong lead-up mark, he can play as a wingman – it really doesn’t matter. He’s got good feet and he runs all day.”
- Alex Witherden: “He’s just skilful, makes the right decisions, gets lots of the ball and is competitive and doesn’t lose. He’ll go pretty high (in the draft) this year.”

“I’d definitely try to get a degree in uni, probably physio.”

“(North Ballarat’s) Hugh McCluggage, for sure. He’s just been dominant all year.”