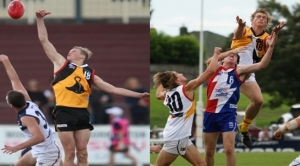 After spending his top-age year in the United States playing basketball, Mitch McCarthy returned to the Dandenong Stingrays in 2016 as an exciting but raw draft prospect.

Having first spent time at the club in 2014, the 196cm Mt Eliza product had his over-age TAC Cup season interrupted by injury but showed enough of his athleticism to earn an invite to the recent NAB AFL Draft Combine.

McCarthy averaged eight disposals, three marks and 19 hitouts per game in six TAC Cup matches this year playing mostly as a key forward and ruckman, and also represented Vic Country in two games at the NAB AFL U18 Championships.

taccup.com.au talked to McCarthy at the Draft Combine, where he was unable to participate in physical testing as he completes his recovery from a navicular stress fracture in his foot.

“I usually talk about my athleticism – because I’m from a basketball background which helps a lot – and probably my skills for my size.”

“I was asked to count backwards from 773 in sevens. I struggled a bit with that. I think I was in pain for about a whole minute, but they pushed me through it and I was waiting for them to say: ‘Alright, you’re good’, but it just didn’t come!”

“I love watching Grant Birchall for Hawthorn. He’s a great kick and he’s mobile. (Port Adelaide’s) Paddy Ryder – I love watching him, a high-flyer. (West Coast’s) Nic Naitanui because of his jumping, and Jared Brennan who used to play for Brisbane and Gold Coast – he was fun to watch.”

How did you come to the decision to choose playing footy over basketball?

“It was probably around draft time last year. A few of my Stingrays teammates from when I was playing U17s were getting drafted and by then I actually had to decide whether I wanted to sign to go to a US university on a scholarship or go back to footy. I picked footy and I’m 100 per cent confident that was the right decision. I was over there for six months and my whole heart was dedicated to that (basketball), but I was starved of footy. It was a hard decision that took a lot of family meetings over the phone.”

“I’m not going to lie – it was tough to get back into the footy rhythm, trying to understand the game. The game’s changed since 2014, with the structures involved. It’s pretty tricky sometimes but the Stingrays have been awesome helping me through it. (Talent Manager) Mark Wheeler, who I work with as a trainee at the moment – I really need to say thank you to him the most. He’s probably accelerated my learning of footy through watching vision of games and talking through different players and structures.”

What type of player do you think you’ll end up being?

“I’d probably say I’ll start off in the back line, get to know the game a bit more and see it from that perspective, and then move up into the forward line and pinch-hit in the ruck.”

- Josh Battle: “He’s an elite kick – I think he’s the best kick in the draft.”
- Bailey Morrish: “He’s very exciting. I love watching him run out of the back line. He’s athletic and he’s got all the traits to be an AFL footballer.”
- Myles Poholke: “He’s a very good grab. I think with his marking ability, he helped us get up in some games this year.”

“At the moment I’m doing a Certificate IV in Sports Development at the Stingrays as a traineeship, so maybe I’ll work through to become a PE teacher and I then want to work my way up the ranks as a coach.”

“(Sandringham’s) Andrew McGrath has done himself good with his form, but I’d have to say (North Ballarat’s) Hugh McCluggage. He’s just too special, that bloke.”