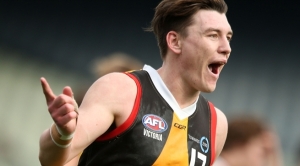 Josh Battle showed he’s one of the TAC Cup’s best mobile tall forward prospects with influential performances in front of goal for the Dandenong Stingrays and Vic Country this year.

The 192cm Doveton product flew the flag with four goals in Country’s losses to both Western Australia and the Allies in the NAB AFL U18 Championships and did so again with six majors for the Stingrays in their TAC Cup qualifying-final loss to Murray, demonstrating his ability to deliver even against the tide.

Battle earned selection in the forward lines of the TAC Cup Team of the Year – after kicking 24 goals in eight games for Dandenong – and the U18 All Australian team, having booted 11 goals in four matches for Country.

taccup.com.au talked to Battle at the recent NAB AFL Draft Combine, where he finished in the top 10 of the kicking test.

“You’ve got to stay humble, but (it’s about) just telling them what you did, how hard you’ve worked and all the sacrifices you’ve made to be where you are today.”

“‘How do you spell ‘gatorade’ backwards?’ which was pretty strange. I also had: ‘217 divided by three’.”

“My agility and my explosiveness is something I’m trying to work on, and trying to get a little cleaner below my knees.”

“I love watching Jack Gunston, being a Hawthorn supporter. When I go to games, I normally just watch him and try to take out some things that he does really well and try to implement them into my game.”

“I think my year was OK. I would have liked it to have been a little more consistent, but I was pretty happy with how my year went. With all the expectations that are put upon yourself and from external and internal people, it’s hard, but I guess you just take it in your stride and you’ve still got to enjoy it.”

“Probably (for Dandenong) against NSW/ACT when we played them in Round 4 at Frankston. I kicked a few that day (four goals from 14 disposals and eight marks in a win).”

- Mitch McCarthy: “We haven’t seen much of Mitch this year because he broke his foot, which was pretty shattering. Hopefully he gets an opportunity and he’ll take that opportunity with both hands. He’s just so athletic and, coming from a basketball background, hasn’t experienced much of the game. You can just tell that he’ll be a pretty good player.”
- Bailey Morrish: “Probably not many people know much about Bailey. He’s sort of slid under the radar but he’s a superstar. He’s got great kicking ability and his speed, power and agility is just phenomenal. He’ll be pretty good to watch.”
- Myles Poholke: “He probably didn’t start the year off as well as he would have liked, but finished the year really well. He’s really strong above his head and he’s really worked hard on his aerobic capacity. He’s going to be a very good player in the coming years.”

“I think (North Ballarat’s) Hugh McCluggage will go no.1. He’s a freak and I loved playing alongside him (for Vic Country) and against him. He’s just a great bloke too.”