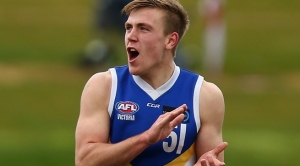 Josh Begley couldn’t have imagined what he’d achieve for the Eastern Ranges in 2016 when he was completing his pre-season with Upper Ferntree Gully in the Eastern Football League.

The 187cm big-bodied mid-forward was rushed into Eastern’s program after a barnstorming start to the local season and promptly kicked six goals on his TAC Cup debut in Round 4, before going on to be named on the TAC Cup Team of the Year interchange and receiving an invite to the recent NAB AFL Draft Combine.

Begley kicked 26 goals – including bags of five and four majors in addition to his six on debut – and averaged 17 disposals and four marks per game in 15 TAC Cup matches, moving into more of a midfield role as the season progressed.

taccup.com.au talked to Begley at the Draft Combine.

Could you have imagined you’d be at the Draft Combine when you started the season playing for Upper Ferntree Gully?

“If you told me last year I’d be here right now getting interviewed by AFL clubs, I probably wouldn’t have believed it. Down at Upper Gully, I just wanted to start in the ones and build on their success. They’ve done well down there without me this year – they won the (Division 3) premiership in an undefeated season. It would have been good to play, but (I went on to) bigger and better things I think.”

“I’ve been saying that I pride myself on my competitiveness and also my contested footy – I love that, and just crashing into packs.”

“I got asked how to spell ‘Melbourne’ backwards, so that was a bit of a struggle. I got it right in the end – it took me a while though!”

“I definitely have to work on my endurance. Not having a TAC Cup pre-season, I’m probably a bit behind all the rest.”

“I’ve been told (I play like Melbourne’s) Christian Petracca and (Port Adelaide’s) Ollie Wines – that kind of contested midfielder/forward role, setting up the play for everyone in the forward line.”

You kicked six goals against Tasmania on your TAC Cup debut in Round 4. Did you feel comfortable at the level from the outset?

“After that game I felt comfortable, knowing I can actually do it. I’ve definitely changed as a player and a person. I obviously dropped a few kilos and got a little bit fitter, which helped me get around the ground a bit more and get to more contests.”

“My first game (15 disposals, six goals in a win against Tasmania) or against Bendigo (in Round 6) I kicked five goals (from 16 disposals and nine marks) – that’s when I started playing in the midfield.”

“A person who took my eye was Willem Drew from North Ballarat. He’s kind of a similar player to me. I played on him and had a couple of battles with him. He had a couple of games against us (losses for Eastern in Rounds 8 and 17) that he dominated.”

“I’d hope my dad would give me a job at his business. He’s a customs broker. My brother works there so hopefully I can get a job there if it doesn’t work out (at the draft). I’m the favourite, so I should get a job.”