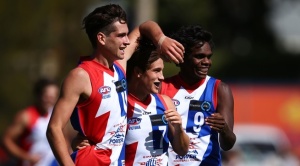 The TAC Cup recognised ‘Drive to the Game’ Round on the weekend, with the centrepiece being a triple-header of games between country teams at Queen Elizabeth Oval.

The Gippsland Power used the occasion to notch their first win of 2017, knocking off home-town team the Bendigo Pioneers (1-2) by 26 points.

Gippsland engineered a 54-point turnaround in the second half after going into the long break 28 points behind a Pioneers team missing five NAB AFL Academy members who played at the MCG the following day.

Stand-in Power captain Will Stephenson (replacing AFL Academy member Aidan Quigley) sparked the comeback with two goals to start the third quarter and added another shortly before the last change to put his team 12 points in front. Nick Hogan (32 disposals, nine clearances) continued finding the ball in the clinches as Gippsland sealed victory in the final stanza.

The Geelong Falcons continued their barnstorming undefeated start to the season by defeating the Murray Bushrangers (2-1) by 54 points in the second leg of the country triple-header.

The Falcons are the TAC Cup’s highest-scoring outfit and showed their potency in the second half, exploding with nine unanswered goals to turn around a one-point deficit at the main break. Gryan Miers and Lachlan Noble each kicked two goals in the second-half onslaught, while Cassidy Parish (29 disposals) and Harry Benson (27) were Geelong’s major ball-winners.

In the third game of the triple-header, the Dandenong Stingrays (2-1) continued the GWV Rebels’ winless start to 2017 with a hard-fought 20-point win.

As rain hit in Bendigo, the Stingrays swam to a 54-point lead at half time thanks to an eight-goal-to-one first quarter. Bottom-age forwards Jai Nanscawen and Bailey Williams both had three goals by the long break, while Mitch Cotter (27 disposals, eight clearances for the game) started things in the middle. The Rebels worked to within 14 points of the lead midway through the last quarter but Dandenong steadied late.

Meanwhile, the undefeated Sandringham Dragons joined Geelong at the top of the ladder in recording a 64-point triumph over the Western Jets (1-2) at Burbank Oval.

Isaac Morrisby and Aaron Trusler were weapons inside 50 for the Dragons with four goals each, while Andrew Brayshaw (26 disposals, 11 tackles, 10 clearances) was influential in the contests.

The Northern Knights (2-1) were spurred to victory over the Eastern Ranges (1-2) at Preston City Oval by six goals from Joel Naylor.

The 190cm Whittlesea junior had five majors by half time when the Knights had opened up a 17-point lead. The Ranges were gallant after the main break but fell short by 15 points.

In the final match of Round 3, the Oakleigh Chargers (2-1) finished strong at Rams Arena to consign the Calder Cannons to a third defeat for 2017.

The Chargers booted five goals to two in the last quarter to run away with a 43-point win, with Charlie Whitehead slotting four majors for the game.