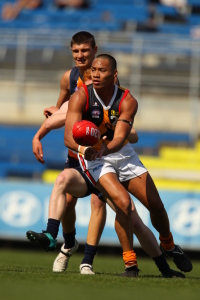 The Stingrays trailed at every break and seemed set for defeat before Todd Elton’s snap in the final minute secured an unlikely 10.2.62 to 8.11.59 win.

Brandon Ellis and Adam Saad were among the hardest workers in an unlucky Calder side, while ruckman Liam McBean kicked two goals for the minor premiers.

With key playmakers Matt Buntine, Alex Benbow and Lachie Whitfield all down on form, Dandenong relied on a gritty effort across the field to overcome a classy Calder midfield, coach Graeme Yeats praising his side’s tenacity under pressure.

“I think both teams were down to three on the bench, Corey [Buchan] went off in the first quarter so given those conditions, [on] a warm, windy day, we were really brave.

“We thought we had a few of our key players who were down and were able to raise an effort to win the game, which is quite significant I think.”

Calder dominated early, with slick handballing down the ground leaving the Stingrays midfield in a spin and the minor premiers drawing first blood through Paul Sahlberg.

While the Cannons continued to outstrip Dandenong through the middle, poor conversion allowed the underdogs to remain in touch, with two majors to goalsneak Darren Minchington providing a spark.

With Calder notching ten scoring shots to three for the quarter, the Stingrays were lucky to enter the first break only seven points down, Yeats criticising his side at the huddle for a lack of physical commitment.

In the second quarter, Dandenong’s enigmatic forwardline started to hit its straps, Jason Salopek and Billy Rolfe’s efforts levelling the scores before Dandenong hit the lead for the first time through Brett O’Hanlon.

The Stingrays’ joy was short-lived as Cannons ruckman McBean kicked two consecutive goals to give his side a 6.7.43 to 6.1.37 lead going into the main break.

The third term proved somewhat of a slugfest as each side scored a goal apiece, Dandenong’s sole major coming through an early 50-metre penalty to Lachlan Wallace, leaving the Stingrays trailing by nine at the final break.

Dandenong flew out of the blocks in the final quarter, the midfield delivering goals to Bryce Kellerman and Benbow, the latter jumping on the end of a string of handballs to snatch back the lead.

The momentum changed again with Cannon Daniel Markworth snaring a contested mark in front of goal, his conversion gifting Calder the lead late in the match.

With the match seemingly lost, the ball made its way back to Dandenong’s forwardline where Elton roved it off a pack and goaled to steal the lead, the siren sounding shortly after, Dandenong running out four-point victors.

Dandenong will progress directly to a Preliminary Final berth, with their opponent to be determined in this week’s Semi Finals.

“All the top four teams, [including] Oakleigh ..... are all dangerous… and I’m not underestimating the other teams,” Yeats said.

“I reckon this is the most even season I’ve seen in eight years, I think any one of eight [teams] can really play a part if they get on a bit of a roll.”

Calder will be back in action this week to take on the rising Western Jets side in their Semi Final clash at Visy Park on Sunday.