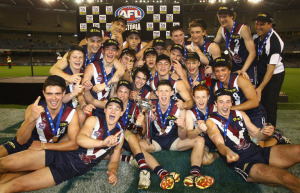 The Sandringham Dragons have won their second TAC Cup premiership, coming from 20 points behind at three-quarter time to beat the Oakleigh Chargers by eight points at Etihad Stadium, as Adem Saricaoglu reports.

For the second week running the Dragons were forced to come from behind at the final change, having overcome a 16-point deficit in last week’s preliminary final against Calder.

Fletcher Roberts was the star for Sandringham, kicking four last quarter goals and five for the game, while Oakleigh midfielder Jack Viney had 38 disposals and won the TAC Cup medal for best-afield.

The Dragons started the game well, quickly recovering from conceding the first goal to boot 6.1 by quarter time to lead by 23 points.

However Oakleigh slowly managed to work their way back into the game after the first break.

Nick Murphy led the comeback for the Chargers, kicking his second goal at the seven-minute mark to reduce the margin to 16.

He then kicked another two goals, and by the 16-minute mark, the scores were back level, before Sebastian Gotch took back-to-back marks in the goal-square to kick Oakleigh into the lead.

The Chargers blitzed the Dragons in every statistical facet of the game in the second quarter and by half time had established a 10-point lead, kicking seven goals to Sandringham’s one.

It took Oakleigh only 13 seconds to continue their dominance into second half, with Damien Mascitti kicking a goal from a centre clearance.

Play was stopped six minutes into the quarter after Charger Dylan Heath had to be stretchered off with what appeared to be a knee injury, however he returned to the game in the middle of the last quarter.

Both sides traded blows on the scoreboard before Oakleigh again asserted their dominance on the game.

With Sandringham struggling to move the ball beyond half back, Oakleigh capitalised when opportunities presented.

Lin Jong found himself on the end of a coast-to-coast goal at the 20-minute-mark to stretch Oakleigh’s lead to 20 points, while at the other end rare scoring opportunities went begging for the Dragons.

Roberts finally broke the deadlock, but not before Toby Greene restored the Chargers’ 20-point lead with a 50-metre goal before three-quarter time.

Within the first six minutes of the last quarter Sandringham whittled the margin down to a point, with Jackson Coleman, Liam Sumner and Roberts all kicking goals.

The Dragons’ resurgence seemed to spark Oakleigh into action, as they again took control at centre bounces and pumped the ball long inside 50.

Mitch Wooffindin and Anthony Soriano both scored to again put the pressure back onto the Dragons.

However as the quarter ticked into time-on, Sandringham again attacked the scoreboard.

Roberts breathed life into the game with his third, before Kenny Ong intercepted an Oakleigh pass and finished with a goal to put the Dragons within a point.

An off-the-ground kick by Anthony Anastasio was then marked by Roberts, who scored his third goal of the quarter to put Sandringham in front, before Anastasio again found him open inside 50 to kick his fourth from the goal-square to see the Dragons crowned the premiers.

After the game Sandringham coach Dale Tapping said his side was always confident they could come back despite trailing by 13 points and lacking momentum half way through the last quarter.

“We just made a couple of changes to what we wanted to do in the middle of the ground,” Tapping said.

“We pushed a couple of guys up, we wanted to get an extra number around the contest, just to get extra coverage and try to get the ball over the top.”

Tapping added the experience of being involved in so many close games throughout the year held them in good stead.

“I think it certainly would’ve helped because at three-quarter time I just said to hang in there, just to keep believing,” he said.

“To gain confidence you’ve actually got to go out and achieve something.

“You gain confidence from being able to do these sort of things, and to win in that manner, you need everyone to pitch in.”

Oakleigh coach Greg Doyle said his players wouldn’t have any regrets after twice losing decent leads in the last quarter.

“We were probably a goal away, maybe late in the third quarter, from putting ourselves in a really dominant position, but they (Sandringham) probably just hung in there well enough,” Doyle said.

“The first five minutes (of the last quarter) were critical, and they just played better footy.”

However Doyle remained positive after what was an excellent year for the Chargers.

“We’re proud of how the boys played and the way they conducted themselves in a game where the result can go either way, and unfortunately we were on the receiving end.”

The premiership was Sandringham’s second in the TAC Cup, after winning it in 1999 (under their then name Prahran Dragons) with a 50-point win over the Gippsland Power.