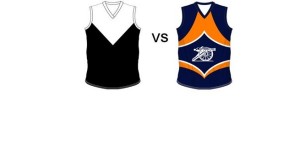 All eyes will be on the North Ballarat Rebels and Calder Cannons this Sunday when they go head to head in the lone TAC Cup contest for the weekend.

This match presents the sides with their first opportunity to compete against one another during season 2012 and it promises to be hard-fought game with both teams surprisingly being unable to secure an outright win in the last round.

The North Ballarat Rebels experienced a somewhat unexpected 24 point loss on the weekend to an impressive Dandenong Stingrays line-up, resulting in the Rebels dropping their ladder leadership.

North Ballarat Coach David Loader was disappointed with the loss but feels it was not a true indication of his side’s capabilities.

“With the TAC Cup being a junior development pathway, these results pop up every so often due to the age and experience level of the players.

“To Dandenong’s credit, they put forward a great performance and it was a really high quality game of footy.

“Our usage of the football was pretty poor, a few of our players were really down on the day and we had some late withdrawals, but that is not to take away from the Stingrays performance.”

The Rebels are making inroads to reaching their full strength side leading towards the finals series.

“We will certainly have changes this week due to injuries as well as players form. At this stage we have four or five top players that are on the road back to recovery and will make their way into the team over the next few weeks. We are not at full strength, but we are getting there.”

Loader believes his side will bounce back against the Calder Cannons this weekend.

“All the boys need to focus on is playing the footy we know we are capable of and stick to what we know we do best. I want to make sure that last week’s result does not create any doubt in their minds as we have had a great season to date,” Loader said.

The Calder Cannons also approach Round 16 having encountered a less than ideal result on the weekend. As the final siren rang out at Highgate Recreation Reserve, the scoreboard read 68 points at piece between Calder and Geelong. Coach Martin Allison was able to see the bright side of the drawn match.

“We took a lot of positives from our draw on the weekend. Some may say we were unlucky not to win, but we showcased a lot of our improvements and have also found areas that we still need to improve upon.”

Although this will be the first time these two sides have competed this season, Allison is well aware of the Rebels style of play.

“I have been monitoring the progress of North Ballarat and Gippsland throughout the year as they have been clear leaders in the competition. As a result, we know what challenge is ahead of us this weekend.”

Both teams will be looking to bounce back from their previous performance and provide themselves with the best path leading into finals.

“My main messages will be to continue in their overall improvement, to learn from our experience in the drawn match and apply the lessons to this weekend’s game against a quality opponent,” Allison said.

As this is the only TAC Cup match for the weekend, the result will certainly transform the top four ladder positions. A win for North Ballarat will see them regain ladder leadership, where as a victory for the Calder Cannons will elevate them back into third spot.