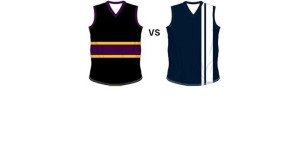 The Murray Bushrangers and Geelong Falcons approach this weekend with the weight of expectation on their shoulders as their season is on the line when they take part in an Elimination Final Saturday morning. The contest will see fifth take on eighth in a regional powerhouse playoff.

The two sides have met twice this year with the most recent challenge being decided by three points. Murray Bushrangers Coach Darren Ogier believes this contest will no doubt have a vastly different appearance with his side making 11 changes and Geelong making 10 since their last encounter.

“We sit at one all after two matches this year, but our last game was during the Nationals so we both had very different teams to our usual sides, such is the TAC Cup competition.”

Although Murray holds the superior ladder position, Ogier has recognised the talent and depth that his opposition possess.

“Geelong leads in many aspects of the competition. They are number one in short kicks, handballs received, uncontested marks and uncontested possessions. We will need to match them across the ground to be successful.”

Geelong enters this elimination knowing that they can match it with the best teams in the competition. Last week saw the Falcons lead the Dandenong Stingrays, placed third on the ladder, up until three quarter time. Unfortunately, the Stingrays produced a six goal last term whilst holding the Falcons goalless to finish with a 28 point win.

If Geelong can string four quarters of football together then they have the potential to generate an upset in this do-or-die encounter.

Falcons Coach Andrew Allthorpe was able to highlight each side’s strengths leading into the match.

“I think our strength lies in the even spread of our group from player one to twenty-two. The depth across the field and on the bench has served us well.

“Murray’s biggest strength is probably how hard they are around the ball. They also utilise their big key forwards very well.”

Since their last encounter against the Bushrangers, Geelong will be boosted by Country Victoria representatives Zak Sherman, Lewis Taylor and James Tsitas.

However, Geelong will be treating this game as though it is any other regular season match to ensure consistency.

“We have tried to keep our approach to this weekend the same. We have a very young group that we have taken through the whole year, so we have managed their workload over the past few weeks to ensure they don’t get too tired. We have maintained the same number and type of light training sessions so that they are fresh for the big game,” Allthorpe said.

The winner of this match will face the loser of Qualifying Final between North Ballarat Rebels and Sandringham which takes place on Sunday.