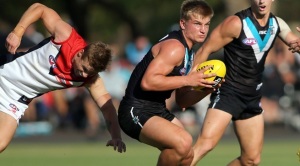 Former Bendigo Pioneers star Jake Stringer has given Bulldogs fans a glimpse of the future with an eye-catching debut in Round 2 of the NAB Cup.

Stringer finished Friday night’s one-point win over Hawthorn with just a single possession but it was a cameo fans won’t soon forget.

The number five draft pick from the 2012 NAB AFL Draft made an immediate impact after coming on as substitute in the second half with an amazing goal from deep in the forward pocket with his first, and only, touch of the sherrin.

Unfortunately for Stringer and the Bulldogs, the key forward prospect hobbled off shortly after with a suspected sprained ankle.

While it is unclear how long he will be sidelined for, the injury is believed to be unrelated to the broken leg sustained in 2011 that kept Stringer out of action for more than 12 months.

Former Oakleigh Charger Jackson Macrae showed his own potential, gathering eight possessions after also coming on as a second half substitute.

Number one draft pick Lachie Whitfield is on track for a Round 1 debut after another impressive hit out for Greater Western Sydney.

Whitfield had 17 disposals playing through the Giants midfield in what proved a close encounter with the Brisbane Lions. While it was the Lions who prevailed by three points, Whitfield and his young teammates showed they will be a much tougher assignment this season.

Vlastuin, formerly of the Northern Knights, was one of Richmond's top performers in their win over Essendon at Wangaratta on Saturday, picking up 15 touches and laying four tackles.

Wines amassed 21 touches in the Port Adelaide's two-point loss to the Demons, showing the contested ball-winning ability that made him a star for the Bendigo Pioneers last season.

Classy running defender Nathan Wright enjoyed a slightly busier day for the Saints in their win over Sydney on Sunday.

The Dandenong Stingrays export created plenty of run off the half back line and picked up 17 touches to help the Saints overcome the reigning premiers.

Rounding out the weekend for TAC Cup draftees was former North Ballarat defender Tanner Smith, who collected three touches after coming on as a substitute for Fremantle in the Dockers big loss to Carlton.