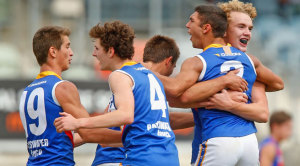 The Eastern Ranges have sent an ominous warning to the competition with an emphatic win over the Oakleigh Chargers in Round 1 of the TAC Cup yesterday.

Last year’s wooden spooners led at every change, surprising the reigning premiers with a four quarter effort that won plenty of admirers.

With the imposing Tom Boyd at full forward the Ranges were always going be dangerous in attack but it was smalls Andreas Roth and Mitch Honeychurch that got ball rolling in a tight opening term.

Both hit the score board with majors, while at the other end Oakleigh Chargers duo Jack Billings and Aidan Franetic were having a huge say on proceedings.

Billings racked up 10 first-quarter disposals to enhance his reputation as one of the best midfielders in the competition, while Franetic’s poise was clear for all to see.

A wrist injury to Honeychurch saw the Ranges lose one of their best but a narrow quarter-time lead was well deserved.

A more free-flowing second term allowed both sides a chance to shine and Ranges centre-half forward Christian Petracca did exactly that.

With Boyd receiving close attention from Chargers defender Hugh Beasley, Petracca and fellow tall Connor O’Sullivan were able to find space to help their side post a 12-point lead at the main break.

The tireless work of Billings and Franetic, along with on-baller Jake Kelly kept the Chargers in touch during an entertaining third term but all signs pointed to an upset.

The Ranges had winners all over the ground and with Nick Evans (25 possessions), Ben Cavarra (26) and Jordan Walker (24) finding plenty of the football the dam wall eventually broke.

Roth was another to enjoy the onslaught, kicking two final-quarter goals to finish with four of his own and stretch the margin to 48 points at the final siren.

The Ranges now face the Sandringham Dragons in a mouth-watering encounter at Visy Park on Sunday while the Chargers must regroup before tackling the Calder Cannons at Highgate Recreation Reserve, also on Sunday.