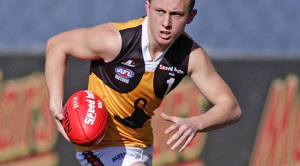 The Dandenong Southern Stingrays of 2012 will be hard act to follow but coach Greame Yeats is determined to try.

The Stingrays produced four draftees last season including the prized number one pick in Lachie Whitfield.

And while players like Whitfield are a rare commodity, Yeats said the example of how hard you have to work and how professional you have to be in your preparation remains.

“Lachie, like Tom Scully who I also had the pleasure of coaching, were obviously supremely talented but also had great work ethics,” Yeats said.

“We always stress the importance of turning up to training ready to perform at your best and we think we’ve got good leaders to set that example this year.”

“They’re all around the 180cm mark, with great speed and an ability to break the lines,” Yeats said.

“They can play on the inside but we’ll probably get them to play as outside-mids so they can showcase their skills.”

Josh Pickers is another highly rated Stingray who Yeats said was unlucky to be injured on the eve of last year’s finals series.

“We really rate Josh. He’s got great aggression and all the qualities you want in a player,” he said.

“Clay McCartney is another who will be looked at.

“He was member of the AIS AFL Academy last season and - while he needs to work on his consistency – his best is very good.”

The Stingrays are also hoping for big things from their contingent of 19-year-olds, led by key position prospects Ryan Marks-Logan and Matt Rennie.