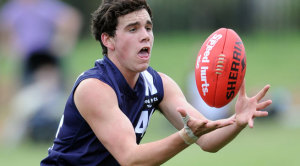 The Geelong Falcons’ coaching staff have emerged from their season opener with the Murray Bushrangers with the knowledge their squad has the depth to go a long way this year.

The Falcons grabbed the points at Craigeburn on Saturday with an impressive second-half performance.

In tricky conditions the Falcons shrugged off the unavailability of host of quality players to triumph 10.16.76 to 9.4.58.

With four of their best on a plane to Europe with the AFL AIS Academy, the Falcons next tier of talent showed their wares to outlast the gallant Bushrangers.

Despite some inaccurate kicking, it was the Falcons’ talls that proved the difference with Fraser Fort booting three goals and Patrick McCartin (pictured) two, to dominate the aerial battle.

In blustery conditions it was the Bushrangers that got the jump early to take a 12-point lead into the main break.

Midfilder Nick Holman was everywhere in the first half, racking up possessions at will and driving the Bushrangers forward where their small-men continually hit the score board.

The hard work of Sam Russell and the marking of McCartin had kept the Falcons in touch and when Fort found form in the third term they suddenly had the lead.

The rangy key forward took several contested grabs and bagged two goals in a highly entertaining quarter that finished with the Falcons holding an 11-point advantage.

Bushrangers defender Jake Sharp was another to impress with his composed ball-use a feature out of the back half.

With the wind at their backs it was the Bushrangers that struck first in the last term through smart work from Nathan Drummond.

The half-forward dodged two opponents before snapping truly from the top of the goal square to drag his side within a kick.

Midfielder Michael Gibbons had willed himself into the contest and with Brydon Squire firing, the Bushrangers looked as though they might run away with the win.

But with the game up for grabs it was the Falcons that held their nerve, running the ball into the wind with flare  and confidence.

Darcy Lang, as he had all day, found time and space where there was none and drove the Falcons forward where first McCartin and then Scott Dixon was waiting.

Dixon’s set shot from near the behind post sent his side 11 points clear and the Bushrangers’ hopes were dashed.

A great snap from Kody Spokes capped a terrific day for the Falcons and pushed the final margin to 18 points.

The Falcons can make it two from two when they take on the North Ballarat Rebels this Sunday in Warrnambool, while the Bushrangers host the Bendigo Pioneers in Shepparton on Saturday.